Google Inc has rebranded as Alphabet, with the new corporate identity being used to operate a collection of businesses, including the search engine.

The Google brand will continue to exist, but at a holding level the new Alphabet identity will be used, with Alphabet Inc replacing Google Inc as a publicly traded identity. Alphabet uses the new URL abc.xyz.

Alphabet chief executive Larry Page says: “Alphabet is mostly a collection of companies, the largest of which, of course, is Google.”

He adds: “We are not intending for [Alphabet] to be a big consumer brand with related products – the whole point is that Alphabet brands should have independence and develop their own brands.

“We liked the name Alphabet because it means a collection of letters that represent language, one of humanity’s most important innovations, and is the core of how we index with Google search! We also like that it means alpha‑bet (Alpha is investment return above benchmark), which we strive for!”

The rebrand is part of a wide-ranging restructure of the Google business, which Page says aims to make it “cleaner and more accountable”.

Page says Google is being “a bit slimmed down” as part of the move. A new Google management team is being introduced, with Sundar Pichai, formerly Google senior vice-president of product, being promoted to chief executive.

Google and X lab will be wrapped into Alphabet

Other businesses contained within Alphabet will include design and R&D entity X lab (formerly Google X) which has worked on projects including Google Glass and is currently developing the Wing drone delivery venture.

Last year Google acquired US product design consultancy Gecko, which was brought in to X lab.

Page says the company will also be developing its investment, ventures and capital arms as part of the restructure.

He says of the restructure: “We’ve long believed that over time companies tend to get comfortable doing the same thing, just making incremental changes.

“But in the technology industry, where revolutionary ideas drive the next big growth areas, you need to be a bit uncomfortable to stay relevant.” 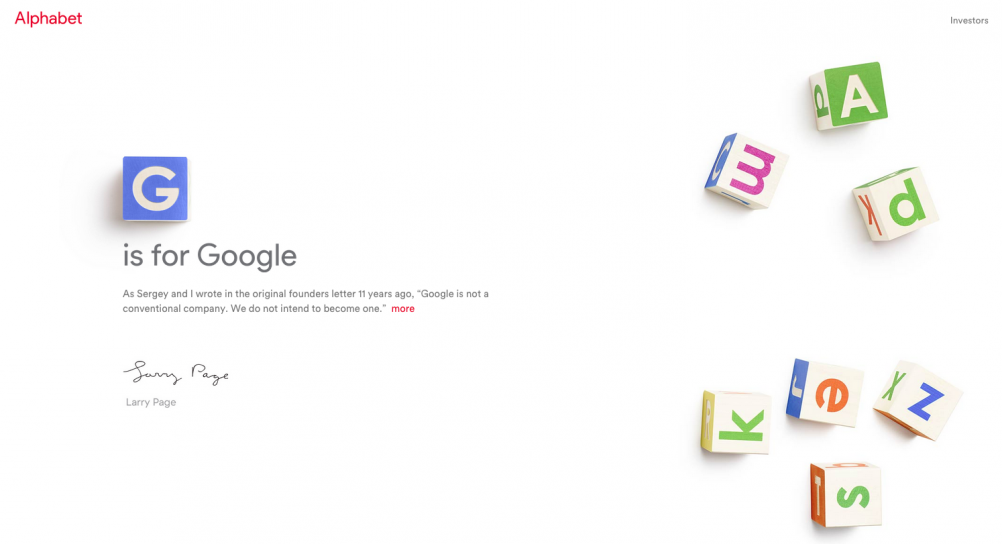