The project, which comprises everything from livery and interiors, to amenity kits and meal services, was undertaken over the course of a year, representing what PriestmanGoode director Luke Hawes says was one of the studios “quickest turnarounds” ever. 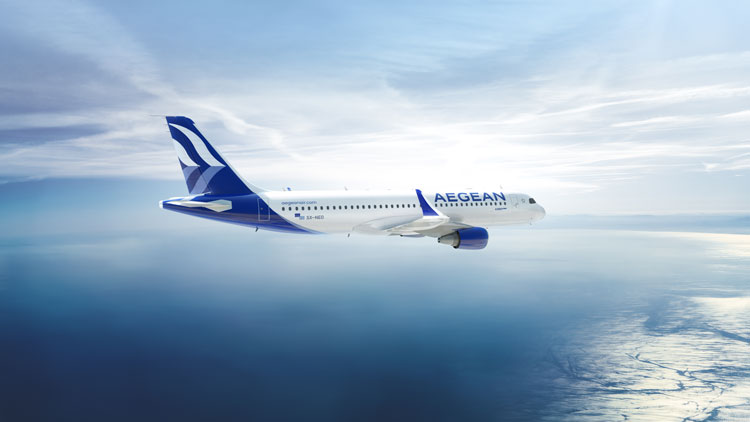 Greek cultural and architectural heritage sits at the core of the new look, according to the design studio.

Identifying this heritage as centring around “classical forms, bold design and purity of symmetry”, PriestmanGoode created a new logo for the airline, which is comprised of a redrawn Aegean wordmark and a twin-gull symbol.

“The wordmark combines clean and sharp angles with rounded details that add softness of form, reminiscent of classical Greek architecture,” says the studio, adding that the symmetrical twin-gull represents balance. The use of the gull is also a nod to Aegean’s previous branding.

The colour palette also takes inspiration from the country, this time from its landscape. With a focus on blue and white, the studio says the colours “celebrate the whites and silver-blues of the Greek skies, and the vibrant blue of the Aegean Sea”.

The adoption of the new brand coincides with the launch of Aegean’s new fleet of A320neo aircraft.  Using the updated identity, PriestmanGoode has additionally created the airline’s cabin interiors, as well as new livery.

Subtle use of the new logo will be used throughout the cabin. The twin-gull motif has been stitched into headrests, and on “brand panels” found at the front and rear of the aircraft.

Elsewhere, it will be extended to soft furnishings, which have all been commissioned exclusively for the airline, as well as on meal trays and other in-flight amenities. 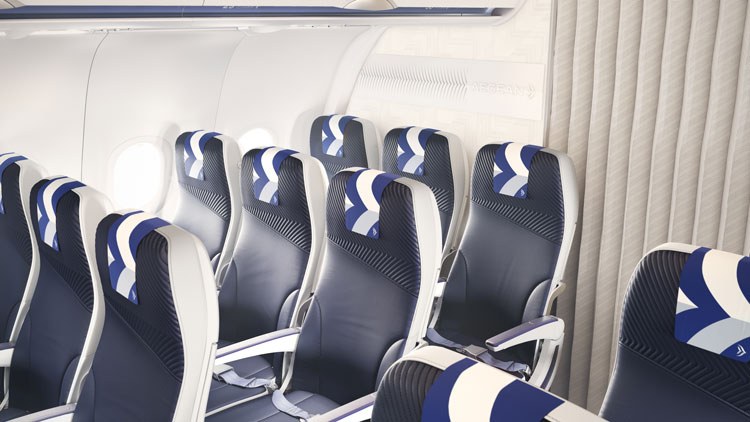 Across physical and digital

Alongside one of the quickest turnarounds, the identity also represents one of PriestmanGoode’s biggest.

“This has been one of our most comprehensive branding projects to date,” says Anthony Morgan, head of brand at PriestmanGoode.

“The world has changed immeasurably since the last iteration of Aegean’s brand identity, and airlines now need to have a strong online presence. We have designed a distinct identity that can apply across both physical and digital touchpoints.”