“Design has the ability to help people overcome fears,” say Rebecca Thomson. Thomson, with her co-founder Rachita Saraogi, is the director of social change organisation Sisterhood. The two designers were inspired to start the organisation and its studio towards the end of their degrees at Central Saint Martins (CSM).

They had taken an interest in social impact design and when the time came to find work experience, Saraogi and Thomson noticed how many of the visiting professionals were men. “That struck us because we were an 80% female cohort at CSM,” Thomson says. 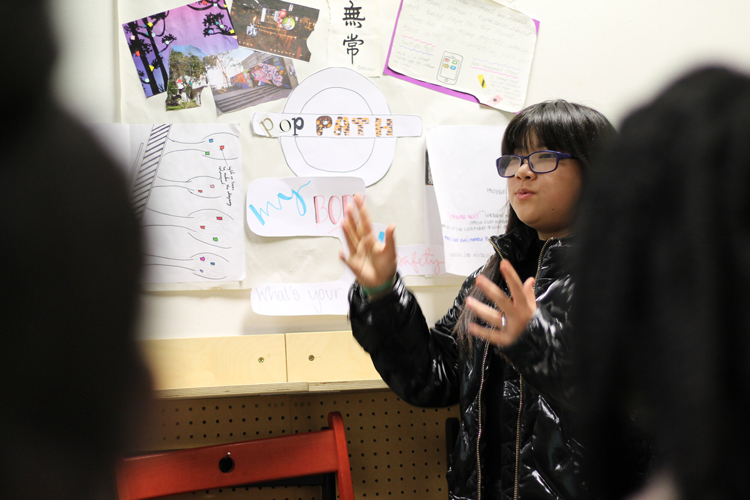 They approached the problem as a research project and found that one of the causes of the drop-off between education and industry is a lack of confidence, which starts when women are young. “The experiences you have when you’re younger feed into the confidence, courage and charisma you have in your adult life,” Thomson says. “These sit more uncomfortably with women than men.”

The pair sees design as a way to build confidence in young girls – a belief taken from their own experiences. “I’m a nervous public speaker but the minute I’m talking about design work, I don’t feel the nerves are there,” Thomson says. “I’m so passionate about what I’m talking about it means that fear and anxiety fizzles into the background.”

Creating an “equity of confidence” 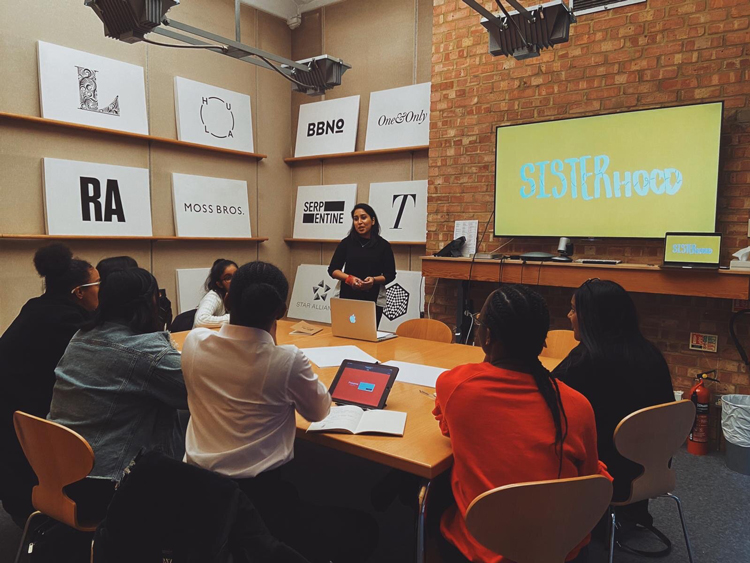 In 2015, Sisterhood began to run programmes at secondary schools for girls aged 13-17. The projects take a design-based approach and address issues that affect the students, such as inequality, public safety and period poverty. The structure of these project vary. One course aimed to give students an insight into design education and industry with a brief set by the V&A and Amnesty International.

Sisterhood recently partnered with policy campaign group Our Streets Now, which is attempting to make public harassment illegal. According to Thomson, the issue of sexual harassment has been repeatedly raised by students over the years. The project – which ran in this year’s Easter holidays – started with a two-day workshop about what harassment actually is and how to address it. Sisterhood then worked with the girls to “design and imagine what this change would look like,” Thomson says.

Two prototypes are going through a feedback stage with a number of volunteers, explains Thomson. One focuses on how teachers can monitor behaviour while the other aims to open up conversations between students on what can be a difficult topic. While the project was planned a year ago, it’s timely given the death of Sarah Everard and the concerns generated by Everyone’s Invited, an Instagram page which publishes allegations of sexual harassment at schools.

While the prototypes are under development, solutions could take the form of a card game or an app-based initiative, suggests Thomson. “While the responsibility shouldn’t fall on girls the whole time, they should have the opportunity to help if they want to,” she adds. 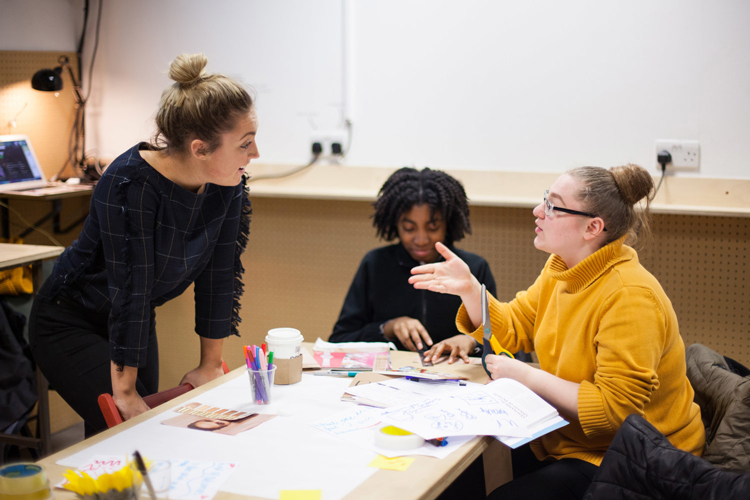 The benefits of implementing design thinking into traditional education is relevant in and out of the classroom, according to Thomson. From critical thinking to iteration, the process “equips students with life lessons and transferable skills that can see them into their professional careers and beyond”, she says. Certain parts of the design process such as choosing typefaces and colour palettes “shows the impact their decisions can have”, Thomson adds.

Thomson also believes it could encourage students from more diverse backgrounds to pursue design at higher education. And while the lessons would be helpful for boys, the focus of Sisterhood is creating an “equity of confidence” for girls. All the programmes are open source so that teachers and students can apply them to mixed or single-gender classrooms.

The reality for schools, and especially schools in poorer areas, is that budgets are constrained. The studio arm of Sisterhood was created as a way to fund the educational side, explains Saraogi. At the moment, the designers spend around two or three days a week working at schools and two days in the studio working on commercial projects. The studio has become a way for the designers to build a “niche” for themselves, Saraogi says.

Though their client list is evolving, projects so far have focused on sectors such as healthcare, social justice and human rights. Saraogi and Thomson aim to apply a human-centred approach to these projects. One involved working with prison inmates over eight weeks to design anti-theft bags which were made and sold through charity shops. A co-design project at a hospital in Newham focused on creating wayfinding signage for dementia patients at a hospital ward.

They have also included girls in studio work – whether that’s through a live brief set by clients to getting girls to contribute to client projects. “There’s a synergy” between the school and studio work, Saraogi says. “They’re not two separate things.” Including girls in client work not only benefits the students but also the brands, according to the designer. “If you’re making things for girls and women, they need to be there at the table,” she says. “So much is assumed about young people, and young girls especially.”

Involving girls is a way for brands to be “embedded in youth culture”, Saraogi adds. Among her dream clients are Netflix, Nike as well as beauty companies like L’Oréal and Dove – all brands that target young female audiences, she points out. Saraogi says: “We want young girls to have a part in what they consume.”

To learn about the work, you can visit Sisterhood’s website.