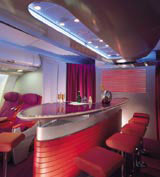 Beleaguered airlines struggling with the effect of the war in Iraq are beginning to turn to design to help their ailing fortunes, and prepare as many marketing drives to encourage passengers back into the air once the conflict is over.

Industry sources suggest Virgin Atlantic is revamping its business class concepts, with Found Associates and Creative Action Design in the frame for work purported to include an onboard revamp and lounge update.

A Virgin Atlantic spokeswoman declined to comment on specifics, but says the airline ‘is always working on a range of projects’.

Droog Design has been linked with a similar brief for British Airways. Though both parties decline to comment further, a British Airways spokeswoman confirms that work is at an ‘early stage’.

These projects represent the first positive news for designers from the large carriers for some time. While budget airlines continue to take market share, the big players have been facing a crisis since 11 September 2001 – a situation compounded by the war and a decline in transatlantic travel.

Between 2000 and 2002 travel to the US fell by 31 per cent (Mintel, January 2003). American Airlines filed for Chapter 11 bankruptcy protection last week, United Airlines and US Airways took similar action last year and British Airways, which slipped out of the FTSE 100 last month, is laying off staff and cutting services.

Virgin Atlantic head of design Joe Ferry would not comment on the business class revamp, but says the airline’s brand is based on ‘product differentiation’ and investment in ‘innovation and blue skies thinking’ is its means to survive and compete.

The only design work Ferry will admit to funding at present is the Airbus A380 order. This triple-decker aircraft is due to come into service in 2006. Ferry says the investment was already committed and it would have been costlier in the long term to pull the plug.

‘We could take a standard aircraft and retrofit,’ he explains. ‘But it’s shrewder in the long run to go with the original funds. While I’m more cautious with spending [in the current climate], the upside of that is more competitive rates from suppliers.’

Companies across the sector are recognising the need to continue to invest in their brand. Inflight catering company FAB Foods has unveiled a new identity – designed by Harrogate-based Section D. FAB Foods sales director Matt Cooke says the difficult situation in the airline sector means that ‘now, more than ever, brand equity and recognition are crucial to us.’

‘Economists might tell [companies] to batten down the hatches. I would say they should ramp up their activity. In times of uncertainty it’s integral that we maintain rewarding relationships between brand and customer.’

JHP managing director Steve Collis suggests design and branding spend by bigger airlines will be cut back in the current climate. But long-term infrastructure projects are likely to remain largely unaffected by economic fluctuations.

‘Companies will be shelving their strategic visions, while still having them within reach,’ he says.

As the aviation industry struggles to remain profitable in uncertain times, those with the capability and drive to invest in brand and product are likely to emerge the stronger from the current crisis.