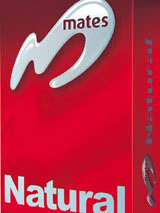 Blue Marlin is revamping 1980s condom brand Mates’ identity and positioning, for a fee of around £150 000, to challenge market leader Durex and create a more ‘irreverent’ brand personality.

The consultancy aims to exploit Mates’ ‘youthful’ brand image to appeal more widely to its core audience of 16to 24-year-old urban males. The identity is unveiled next Thursday and will draw on the brand’s handwritten ‘M’.

Blue Marlin’s research showed customer confidence in the safety of the brand had risen. ‘Mates’ performance matches its rivals, so we chose to differentiate by showing consumers they could have fun with the brand,’ says Andrew Eyles, the group’s managing director.

The redesigned marque was created by a team led by Blue Marlin creative director Simon Rumble. ‘Condom purchasers usually spend only two or three seconds at in-store fixtures, so we used strong typography and colours to grab their attention,’ Rumble says.

Physical packaging is scheduled to relaunch in the autumn, also by Blue Marlin. The group won the work after an ‘informal’ credentials pitch last October against unnamed rivals, says Remco Teulings, Mates marketing and business development manager for Europe, Middle East and Africa.

Mates was launched by Sir Richard Branson in 1987, with its iconic ‘M’ an inverted Virgin ‘V’ symbol, according to Eyles.