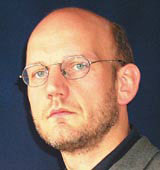 The promise of venture capital riches was too good for many businesses to refuse – but Paul Hoskins didn’t succumb. He reports his preferred strategy

Two years ago, like many owners of design companies with a technological capability, I was being hounded by venture capitalists, software companies and various design and advertising groups with the promise of untold wealth.

In exchange, all they needed was a simple signature that would deliver my company into the hands of the ‘board’ – normally a remote group of people who knew little about design and answered only to the ‘investors’ – a nameless group of individuals, normally in the US, who were planning to float on the stock market for vast profit.

I must admit I was tempted, not only for the money, but also for what it would allow us to deliver. However, even then, when paper millionaires were being made every day, I remembered ‘all that glitters is not gold’.

One of the downsides of the advent of digital media is that groups such as ours are now expected to deliver everything – from branding and communications consultancy through to the design-and-build of complex intranets. This requires a broad skills base (ie critical mass of staff), which in the current climate is widely available, but without the clients to pay for it.

While most people’s reaction to the current downturn is to pull in their horns and reduce core offerings, I believe there is an alternative that doesn’t involve selling to a bigger group. In the last Design Business, Paul Foulkes-Arrellano looked at partnering with other organisations (DW 27 March). I suggest there are also opportunities to acquire companies that are currently struggling, that fill gaps in your delivery and that can be secured at very reasonable cost.

Nine months ago I put my theory to the test. Precedent acquired Pinnacle Internet, an Internet service provider with a strong development capability, but little sales ability, and transformed it from what was arguably a company without a future into an extremely profitable subsidiary.

While no sensible person would proceed with such a venture without considering how much it might cost in terms of purchase price, it is too easy to forget the hidden costs – the main one being the call on management time. You may well have a robust management infrastructure. However, you should not underestimate the effect on key personnel during the weeks of time required for negotiations. It will disrupt the delicate balance of skills that makes any company work.

If after careful thought you are still keen to proceed, how do you go about selecting organisations to approach? First, ignore those that are just a smaller version of your own company. Instead, identify gaps in your offering, ones that will widen your portfolio and allow you to cross sell without significantly increasing the existing burden on your own staff.

The next most important thing, even before the numbers are crunched, is culture fit. If the culture of the two organisations cannot be reconciled you will find that in a short space of time you have bought nothing, as both staff and clients will quickly abandon ship, leaving you with a whole bunch of liabilities and no assets.

Look for organisations where the owners are not heavily involved and where the second tier of management is capable, but, more importantly, ambitious. These individuals should be just waiting to be given the chance to prove themselves and happy to adjust how they work to this end.

Having found an organisation that ‘fits the bill’, be very careful with the lawyer’s bill. One of my biggest mistakes in our acquisition was the delegation of the contracts to a large City law firm. It added months to the negotiations, not to mention many thousands of pounds of expense. Hindsight suggests a face-to-face meeting with the vendors, followed with a heads of agreement letter prior to passing to the lawyers (who spend more time covering their butts than yours) is a far better option.

My final point is this; once the purchase has been made, it is imperative that you achieve that crucial symbiosis between the personal and collective objectives of both staff and companies. This needs to be done in the early weeks of integration and should not be underestimated as a task.

To sum up, acquisition is a better option than organic growth in the current climate and something that should be considered if it would help your organisation to better meet its goals.

However, don’t neglect your existing commitments, don’t underestimate how the process can unnerve your own staff, as well as the target company’s, and don’t be blinded by financial and legal ‘speak’. Yes, you need accountants and lawyers and yes, you need to be 100 per cent sure you can afford to undertake the process. But never underestimate your own business acumen – undertake the bulk of the negotiations and deal construction yourself and, most crucially of all, use your common sense. Happy hunting.