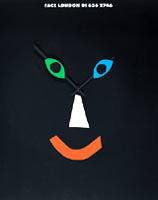 A batch of 1980s clocks has turned up following a clear out at Pentagram. The timepieces were designed in the decade that taste forgot by current group director John McConnell.

Originally gifts for clients at Face Photosetting – a typesetting company launched by McConnell in the 1960s – they even feature its original 01 telephone number, from the days before London numbers resembled a bingo scoresheet.

McConnell has gallantly parted company, for what he hopes is the last time, with the twenty remaining autographed examples, and they are now on sale at the Ian Logan Design Shop in central London.

These ‘mastertimepieces’ are guaranteed to complement the rest of your new romantic-era paraphernalia, such as your Sodastream and ZX Spectrum.