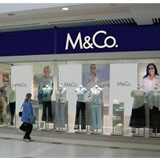 The M&Co marque was previously used for the store’s premium line and was the name of a number of its stores. The company’s sub-brands include Kylie for teen girls, Navigator for boys and Springfield for men. Each, with the exception of Kylie, will be renamed as M&Co.

‘M&Co was its best brand; it’s slightly more premium. Previously, the company spread itself out too much,’ says ASHA partner Marksteen Adamson.

ASHA created a marketing campaign for Mackays last year and the rebrand repositions the company along fashion lines while retaining its ‘value’ credentials. The identity is being rolled out across its 300 UK stores and includes a revamp of in-store signage,