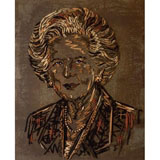 A 1.5m portrait of Margaret Thatcher, constructed from silk chiffon and rusted iron, has been created by freelance designer Benjamin Shine.

He presented the work to the former Prime Minister last week and it will feature in a larger collection of portraiture that Shine is compiling.

Shine requested permission to create a portrait of Lady Thatcher after they met at an exhibition of his work in 2003 and began work on the piece early this year. The portrait is constructed from varying lengths of torn silk chiffon that are woven through 1500 eyelets in the iron.

Shine won the Enterprising Young Brits award in 2004 for Skoody, a convertible scarf and jacket.