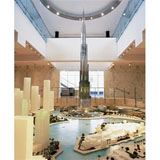 With its first design forum next year, Dubai is the place to go for design groups with their sights on the Middle East, says Lynda Relph-Knight

Dubai is an affluent place, especially for the thirty-somethings from across the globe, who have come to make a mark in the fast-emerging region.

Rupert Diss, the British director of marketing and innovation at the Madinat Jumeirah, and his counterparts within the Jumeirah hotel and leisure chain, all fit into this category. And the same is true in design. Gregg Sedgwick’s branding group GSCS, for example, boasts a multicultural team. Some of its members, including Sedgwick, a Brit, have lived there for some ten years.

So what is so great about Dubai, a desert nation barely 30 years old, with a phenomenal development programme centring on commerce and tourism?

‘Lifestyle’ is the word on everyone’s lips. It is de rigueur for the average expat family to have a maid and a gardener. There is no crime – or so we’re told – no gambling and drinking is limited to the luxury hotels and resorts that are enjoying a phenomenal boom in tourism. Until now, salaries for the marketing and creative set have compared favourably with London rates – though signs are now that they are declining – and there is no income tax. You need no visa to visit, no jabs and it’s only a six-hour flight from London, with a three-hour time difference.

The downside? Top of the list is the heat. With temperatures of 33ºC in the shade during the springtime ‘mild’ season, locals can only look forward to the 45ºC heat in summer. This means you can’t walk anywhere with any degree of comfort.

The press isn’t ‘free’ – hence perhaps the claims about low crime figures – though according to local journalists that is changing. And married women need their husbands’ written permission for anything that involves officialdom.

For the creative industries there are added bonuses. You can’t help but be impressed by the pace of things. Buildings emerge from the ground before your eyes, in a town frequently dubbed ‘crane city’ because of its rapidly changing skyline. A dubious style palette blends glass and steel with Arabic pattern and mosaic.

And with that pace comes projects. Landor Associates set up an office in the Media City district in 2003, partly on the back of its branding programme for Burj Dubai – the astonishing skypricker that is set to become the world’s tallest building on completion in 2008. The Landor office remains, with a studio led by creative director John Brash.

Landor’s WPP stablemates Enterprise IG and Fitch also work there. Lloyd Northover made a foray before its takeover by Media Square and subsequent merger with Marketplace Design in the UK and ad agencies such as Saatchi & Saatchi are represented.

Mancunian wayfinding specialist Craig Stott, who works with GSCS, says the opportunities for designers are phenomenal. It’s the size and scope of the projects that have convinced him and his wife and colleague Sylvia to stay.

There is also Dubai’s ‘can do’ culture. Anything is deemed possible by exacting local clients. Most local interests are headed by a sheikh, who is usually quick to make far-reaching decisions.

And while Dubai’s rapid growth has helped design groups feather their nests, their influence is unlikely to wane as development approaches saturation over the next five years, say, when many big schemes are due to complete. Dubai is proving to be the gateway to the Middle East, as many had anticipated.

GSCS, for example, has worked in Gulf states Kuwait and Oman on the back of its branding for Dubai concerns.

You don’t have to be local to pick up the plums. UK group Vallis Tammaro has picked up branding for Mowasalat, the company behind Qatar’s transport system since it found a partner in Dubai.

Dubai is a land of opportunity, albeit with a commercial rather than a cultural or social heart. How long it will last is anyone’s guess. The money is there, as is the will to succeed through innovation, even if it is geared more towards Las Vegas without the gambling than the Renaissance patronage that gave us Florence.

• Trade missions to Dubai are organised by UK Trade & Investment

• Trade with UK worth £7bn a year and growing

• Only 30 years old and still under construction

• Note that press freedom is a problem

Build a partnership instead of biting the hand that feeds you