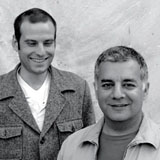 Zimzum creates interactive, tongue-in-cheek furniture that makes people smile. Trish Lorenz talks to Rajko Debeljevic and Peter Mayne about their first collection, working in different cities and the ideas behind their venture

The name Zimzum is derived from the Hebrew word ‘tsimtsum’, which means variously ‘compressing things to their minimum’ and ‘God’s act of creating space in the universe’. Heavy stuff.

However, furniture designers Rajko Debeljevic and Peter Mayne, who comprise Zimzum, are actually very chilled. They like the good things in life (they first thought of starting a business together during a wine-tasting), enjoy each other’s company and give the impression of not taking life – or work – too seriously.

Zimzum’s furniture reflects this approach. Stylish without being po-faced, it embraces industrial aesthetics, yet retains warmth. Most of the pieces have an interactive element, from the fold-up outdoor table Benchissimo to the sliding, curving Move shelves. 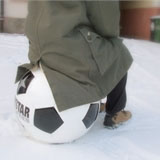 Stoolball, a stool in the shape of a huge football that Debeljevic is lugging around with him when we meet, attracts attention from a young boy, a group of women (who all stop to stroke it) and almost every other person who walks past. ‘People should have fun with products,’ says Debeljevic. ‘It’s great to see them enjoying the Stoolball. There’s nothing more satisfying from a designer’s point of view than to see people smile. It’s like an actor getting applause.’

Mayne and Debeljevic already knew each other socially when they met at the Milan furniture show in 2004. ‘It was a boring year, everything was very similar,’ Debeljevic recalls. The duo promptly decided to work together, and Zimzum launched its first collection, Police, in May 2005.

What makes Zimzum interesting is not only the geographic dislocation – Debeljevic is based in Frankfurt and Mayne in London, and they meet only ‘every four to six weeks’ – but also the space between their personal experiences.

Mayne is a qualified mechanical engineer and a self-confessed geek. He talks of mathematical concepts and materials composition as happily as of design. But after more than ten years of working in product design, he wanted a new challenge. ‘There’s no longevity in product design, things are almost out of date the moment you create them,’ he says. ‘Furniture design is very different. For a start, you’re involved in the whole cycle, from client commissioning through to designing and even selling, rather than just one part of it. There’s also a much more sculptural element to furniture design because of its scale.’ 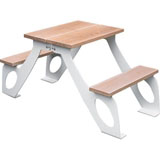 Debeljevic, in contrast, has a crafts background. His graduation pieces from Parnham College were a series of cubes in different materials that were later sold through House and are today ensconced in a variety of public spaces, including the Bank Paribas headquarters in London. At the Royal College of Art, one of his projects was furniture made of bread. ‘I did more arty stuff,’ he concedes. ‘It was fun to do, but it didn’t make any money.’ These diverse skills have served Zimzum well. ‘Because of our backgrounds, we can take things from design right through to production. We have more depth in design and engineering because of my materials background and Debeljevic’s craftsmanship,’ says Mayne.

Both maintain that living in different countries ‘works surprisingly well’. They make use of technologies like Skype to keep in touch, firing ideas back and forward to each other and making amends and suggestions to drawings on-line. ‘When we meet in person it’s quite efficient, we can get down to the nub of things and focus right in,’ says Mayne.

Zimzum’s products are manufactured across Europe; a key partner is Paron, a Slovenian manufacturer that has the experience of producing high-quality furniture for the European market, but also much-reduced labour costs. (Debeljevic’s mother is Slovenian and he speaks the language – ‘police’ means ‘shelf’ in Slovenian). There’s a gentle social responsibility agenda in play too, in a very understated, almost taken for granted, way. Stoolball is hand-stitched in Pakistan and both are keen to ensure that local workers earn a reasonable rate for their labour. 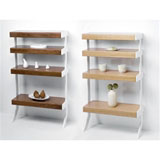 It’s still early days for the group and there is plenty more work planned. Zimzum is in talks with major American retailers that are interested in distributing its products. A coffee table called Quartix will be the next product to launch, and what Debeljevic describes as ‘a flat stool’ together with a domestic light.

Quartix, named after its mathematical shape – ‘a square steering wheel with rounded corners’ is how Mayne describes it – looks as though it should fall over; it has legs in the middle rather than the corners. It is symptomatic of the strength and quirkiness that characterise Zimzum, and once again proves its point that serious design doesn’t need to be heavy.

Morris takes over as MD at Design Bridge