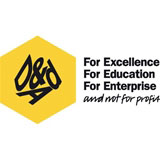 D&AD is launching its first ‘major rebrand’ since its formation in 1962, with designs by Rose, but has steered clear of a radical overhaul.

Rose has developed an identity that retains D&AD’s original Fletcher Forbes Gill logo, first created in 1963, but the consultancy has placed it inside a hexagon, representing the shape of an upended Yellow Pencil – the trophy given out to D&AD award winners and designed by Lou Klein in 1966. Rose has positioned the logo in the centre of the hexagon, so it looks like lead running through the core of the pencil.

The redesign comes as D&AD seeks to launch a series of initiatives in the autumn and boost its international positioning. Further education and business development programmes are thought to be in the pipeline.

‘We were searching for something that was a more iconic representation of D&AD. Core to D&AD is the image of the pencil,’ says D&AD chief executive Michael Hockney. ‘We wanted the new identity to live out of our creative icon, the Yellow Pencil. The marque is designed in part to look like a seal of quality, like a badge.’

D&AD’s portfolio of corporate materials, such as stationery, office signage and membership cards, will roll out from September. It will also be applied to its website, www.dandad.co.uk, which is being redesigned by Design Junction to reflect the branding and will relaunch on 26 September. ‘Going forward for the next 20 years, D&AD could not afford to have a weak identity. It had to be strong and easy to recognise. The previous identity was looking fairly watered down,’ says Garry Blackburn, creative partner at Rose.

Rose began working on the project in August 2005 after being approached directly by D&AD.