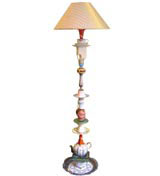 Designing by committee is exactly what husband and wife duo Clare Page and Harry Richardson do. In Committee’s shop in Deptford High Street in south east London, the floor is littered with a miscellany of objects. Among them a porcelain dachshund, a swirly glass vase and a brightly coloured teapot are waiting to be skewered and transformed into one of the group’s Kebab Lamps.

Clients can choose some objects and give hints for their own Kebab Lamp, but Committee then takes over to lovingly craft a lamp over two weeks, which retails for £2500. The group has recently returned from the IMM Cologne fair, where it was invited to show its work as part of the Inspired by Cologne competition for young designers. There, Committee’s humorous and superficially haphazard furniture cut a distinctive dash alongside the other work on display.

‘Has Clare come clean?’ asks Richardson, serving tea from a necessarily random – though nonetheless pretty – selection of mugs and cups. Their guilty secret is that they both studied fine art rather than design (at Liverpool School of Art, both graduating in 1999), and still view the design world with the slightly detached and curious eye of the outsider.

Do their pieces point a mocking finger at the studied, elegant work of design? With a grin, Page says, ‘Basically, we channel up junk from south east London to people in the West End.’ Most of the materials are sourced from the local Deptford market, which in turn, they believe, sources the artefacts from Bromley’s rubbish tip.

Committee agrees it wants its work to set up a dialogue, to ask questions about objects we find around us and which we either discard or overlook. Page says, ‘We are sick of moralising Modernists. The only thing you can be moral about now is ecological stuff.’

However, the group also insists this process is as much aesthetic as it is ecological. They add, ‘Above all, we enjoy decoration. This way we can indulge in decoration without taking responsibility for it.’

The sense of using the discarded and overlooked is also evident in the name – Committee – which the duo adopted. Gallop, the name of the group’s shop, had already been nabbed by a Greek underwear manufacturer, leaving them trawling around for another name. ‘Committee was too boring to have been trademarked,’ they say. The name is also meant to provide an opening to other designers to drift in and out to collaborate with the couple.

The critical stance Committee takes towards fashion is most evident in its T-shirt project, in which the group stores a bank of ideas for exchange. People choose a T-shirt printed with an idea left behind by someone else, while at the same time replenishing the ideas bank with one of their own for a future design.

An irony is that the group’s Kebab Lamps have already spawned a fashion of their own, with replicas turning up in various places. But these simplified imitations elicit a resigned shrug of the shoulder from the designers.

However, mention of the ‘K’ word produces a stronger reaction. ‘Hmm. Not keen on kitsch. Kitsch is sentimental. We are earnest!’ they insist.

Kitsch or not, the Kebab Lamps are set to feature in the windows of Liberty’s Regent Street store as part of a relaunch of its furniture department. There are also plans to do more work with Thomas Goode (‘manufacturers of prestige china since 1827’), following a commission to produce a Kebab Lamp from the company’s own range of traditional porcelain.

While the Kebab Lamps (even the name suggests the streets of South London) have been a success, the way forward for Committee is not clear. The group has rejected proposals from manufacturers to create other objects such as table legs in the same style as the Kebab Lamps. ‘It’s crazy, they would just get in the way and end up broken. When we do something new it will be different.’

As an example, the group cites its new folding wall-mounted Origami table, which opens to display a vista of random objects. The table was also displayed in Cologne, but Committee has yet to find a manufacturer. It is the fruits of Richardson’s decision to study cabinet-making. There is more than a whiff of a pre-industrial artisanal fantasy about the couple, husband Richardson making furniture while wife Page knits. Working with a knitwear company after leaving art school, Page sold scarves at markets and produced limited editions for Topshop.

But now Page and Richardson say they always work together, finding the notion of designing separately inconceivable. Thoughtful, playful and different, the group’s work is certainly not rubbish.

The Gallop Workshop is open on Saturdays between 10am and 5pm at 198 Deptford High Street, London SE8

Russian food producer’s logo no v-type due to error