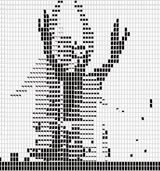 Last year I caught a documentary called A State of Mind made by VeryMuchSo Productions. This captivating film followed two young North Korean gymnasts for a year leading up to the Mass Games. These overwhelming yet highly dubious events require a cast of tens of thousands in a choreographed spectacular – the biggest and most elaborate human performance on earth. The training and rehearsals swamp the lives of anyone involved for months in advance of the shows before Kim Jong II and the Party.

There are a number of sequences in the film that, at first glance, appear to be enormous plasma screens or projections of a slightly crude animation. This intriguing technology was not explained until later on: each ‘pixel’ is indeed an individual holding a book with different coloured blank pages. On command each participant opens the appropriate spread in a split moment with enviable finger dexterity, thus creating an enormous dramatic animated backdrop. These moments in the documentary are truly spectacular and undoubtedly one of the most inspiring images I have ever seen. To roll out such a low-fi mechanism en masse and so efficiently is truly remarkable – and not a single computer in sight.

This fantastic human backdrop inspired a piece of work we are currently developing for a restaurant – Burn – opening in London later this year. We are adopting some charmingly outdated technology – flapper boards – once upon a time found in many of Britain’s train stations. Each flap will perform like a single pixel to create a dynamic image taking a direct feed from a series of cameras both inside the restaurant and in the space outside.