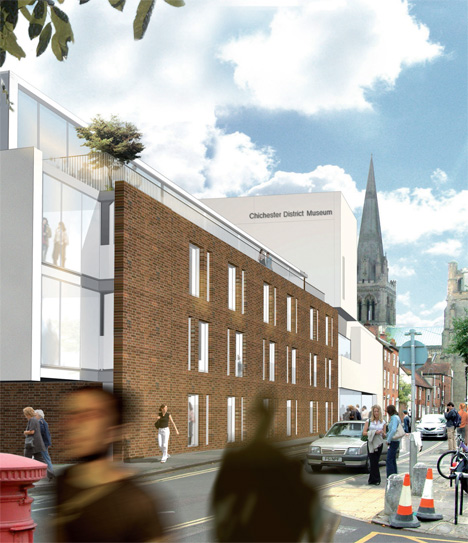 Event Communications is working on the exhibition design for a new museum being built in Chichester for Chichester District Council.

The museum, which has been designed by Keith Williams Architects and will feature branding work by Chichester-based consultancy Profile Design, will house regionally significant archaeological, historical and geological collections. It is due to open later this year.

The museum has been relocated to a new 1200m2 site on the city’s Tower Street from an original site in Little London, which was too small for the museum’s growing collection and was difficult to access for people with mobility problems. The new museum is also situated on the site of the city’s Roman public baths and will allow visitors to see the archaeological remains.

Event began working on concepts for the museum in September 2010 after drawing up a strategic plan for the site three years ago.

The consultancy was tasked with creating a flexible exhibition strategy that would allowfor the shows to be changed regularly to give local people more access to the collections. The stories of local people and places were key to the brief, and Event was asked to allow visitors to contribute to exhibitions, says Chichester District Council arts and heritage development manager Anne Bone.

The ground floor of the three-storey building will focus on the district’s Roman story and will highlight the hidden treasures of the museum in an Alice in
The first floor will focus on themes such as burial places, and shops and trading. A ’treasure box’ display filled with objects will be located at the centre of the room, with projections of the district on the outer walls, says Edmonds.

The second floor will be a reversal of this theme as visitors will be in the centre of the treasure box, with displays of objects up to 3-4m high on the outer walls.

This floor will focus on the emotional connections to historical events and will be split into themes such as bravery, beauty, sorrow and creativity, says Edmonds.

The museum will have a ’behind the scenes’ look and feel, using archive boxes and drawers, so that visitors can discover objects in a hands-on way, says Edmonds.

The exhibitions have been designed to be object-focused, allowing the museum to rotate the exhibitions to exhibit their large collection.

Edmonds says, ’The idea is that every time you come you can see something that hasn’t been on display before.’