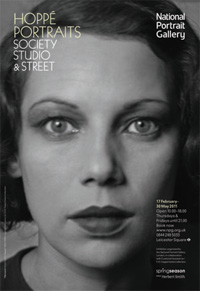 A new National Portrait Gallery exhibition on the life and work of photographer Emil Otto Hoppé will open next week, with branding and campaign materials designed by Rose.

Hoppé Portraits: Society, Studio and Street will combine Modernist portraits of personalities including George Bernard Shaw and Margot Fonteyn with photo-journalistic studies of Britain between the wars.

Rose was approached directly in May 2010 and presented credentials before being briefed to consider the context of the exhibition. Rose partner Simon Elliott says, ’Hoppé is one of the most important 20th-century photographers, but has become a well-kept secret among art and photography lovers – we need to bring that to a contemporary audience.

’Most galleries would want one image, but it needs to represent a body of work in this instance,’ says Elliott. He says Rose has used two leading images from the collection. ’One is quite reserved and almost fashion-led, and the other engages on a witty and emotional level,’ says Elliott. A 180-page case-bound catalogue designed by Rose, covering Hoppé’s career, will feature these images – Tilly Losch (pictured left) on the front and The Pearlies’ Master Dennis Simmons (right) on the reverse.

The campaign images will roll out over national press and most poster formats including cross-track 16-sheet London Underground posters. There will also be branded banners at the entrance to the gallery.

A redrawn font based on a number of 1930s sans serif fonts, including Wilford, make up the typographic design, which Elliott describes as ’strikingly bold, simple and appropriate’.