Solemn, passionate and dark, flamenco is marked by its commanding foot stamp, twisting hands, the toss of a head of heavy hair and the brown tones of a southern Spanish voice singing el cante.

Without wishing to boil a culturally diverse nation down to a handful of adjectives, it seems that the dark, imposing and ornate wooden furniture found in many Spanish homes and churches echoes its national artform.

High-backed chairs, carvings, brightly coloured lacquer and heavy-panelled doors with strong metal hinges and hardware have typified Spanish furniture from Renaissance times onwards, but an upcoming exhibition in London of furniture by seven manufacturers from the Castilla y León region in the north of the country will attempt to show where Spanish style is now. 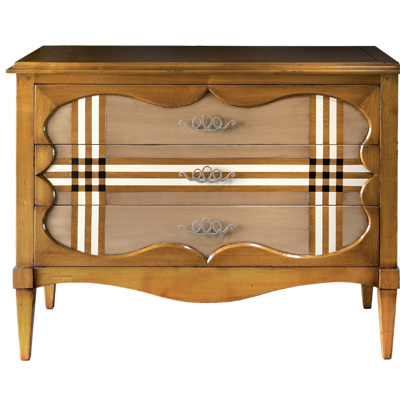 Among the exhibitors are Møll, which offers clean, contemporary, Modernist furniture in marble that, as its name suggests, could almost as well originate in Scandinavia.

Another is Berlanga, which creates pieces crafted from eco-friendly Spanish walnut and cherry woods, some with a slightly questionable mail order catalogue look.

Lola Glamour stands out from the crowd, with its striking and eccentric pieces, their roots firmly in traditional Spanish furniture. Postmodern and playful, Lola Glamour pieces are eclectic patchworks of traditional dark and painted wood, combined with high-gloss, white, Modernist-inspired shelving, creating a bamboozling hotch-potch of styles that simultaneously pokes fun at the past and carries it convincingly into the future.

Furnishing optimism on the continent