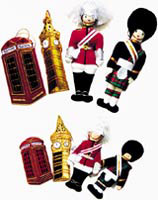 Anti-copying in Design is encouraging product designers to include subtle, seemingly trivial design elements in work to ward off potential plagiarists.

The advice follows the successful conclusion of a case by designer Nicola Barry, founder of St Nicolas, against the retailer Harrods for the infringement of her Christmas decorations.

Details in Barry’s designs, which include renderings of London icons such as Big Ben, a telephone box, a Scotsguard and a Lifeguard, were also copied, she claims. For example, her Big Ben clock is set at 3pm, the same time as the Harrods product.

Elements that are insignificant to the overall design can act as a trademark for the designer and can trap copyists, says Acid chief executive Dids Macdonald.

‘Maybe the message will get through to retailers that they should commission and pay for designs and not copy them,’ she continues.

Barry wrote to Harrods to allege infringement of intellectual property rights having been advised by Acid’s lawyer Theodore Goddard. Harrods’ counter-claim was that she couldn’t claim rights because her designs were based on objects ‘commonly seen throughout the UK’.

Barry claimed damages against Harrods, which has paid her £60 000 and undertaken not to sell any of the four disputed designs after a four and a half year battle, but has not admitted liability.

Be careful when branding all the design experience