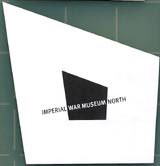 In 2001, Agenda pitched in a tender for exhibitions work in the Daniel Libeskind-designed new Imperial War Museum North. It opens this summer in Trafford, near Manchester, and is part of a family that includes the London Imperial War Museum, HMS Belfast, the Cabinet War Rooms and Duxford Museum. In the pitch, the consultancy persuaded the client that before it could start thinking about exhibitions, it first needed a corporate identity and visual language. Agenda won the pitch to create that identity, along with its attendant visual language, brand manual, signage and marketing materials.

Because the IWMN eschews the collection-based approach in favour of an immersive experience focusing on a core proposition called War Shapes Lives, Agenda decided to opt for simplicity. As Agenda creative director Paul Davis recalls, ‘We were not expected to reference the London war museum visually, so decided to create an identity that used angles and tension to communicate conflict in its most basic, understandable form. We liaised extensively with the architect, whose building design is so much part of the IWMN experience,’ he continues. ‘In fact, we worked extremely closely with the whole IWMN team, which gave the whole project great cohesion and impact.’

Davis applauds the creative courage of the client, which he says ‘took a progressive, global approach, whereas other museums might tend to have a less integrated vision. And by bringing us into the team early on, we were able to be involved in formulating the core idea and the positioning statement. There was no history, no sacred cows. It was probably the most sensitive of all the projects we’ve worked on.

‘War is always an issue that requires careful handling, but it became much more potent following 11 September. Quite apart from anything else, the communications are really put to the test – people were less likely to want to have anything to do with war in their leisure time when it is permanently on their television screens, newspapers and in their minds. That’s where the relevance of the communications come into their own. War shapes lives was suddenly brought home to us all.’