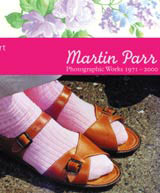 For 30 years English photographer Martin Parr has been photographing Brits at their most egocentric and idiosyncratic, and a retrospective of his work opens later this month at London’s Barbican Gallery.

On the strength of having designed the Phaidon-published monograph that will accompany the exhibition, Una was asked to design the exhibition and all its publicity material, comprising the poster, a leaflet, private view cards and gallery guide.

‘We were trying to get across Parr’s images over a 30-year span, and felt that the common factor was a slightly exaggerated approach; a tacky and satirical way of capturing things,’ explains Una designer Axel Feldmann. ‘So the essence of the design is exaggeration; pink for the oversized subhead script face (Monoline Script) and background to the body text (Plantain), along with all the elements being either slightly too big or too small the feel created is one that’s edgy and uncomfortable,’ he says.

While many of the typefaces used in the exhibition’s design to evoke the period of the work in the room could not be incorporated into the print material because of space restrictions, one element which is carried across successfully to the leaflet is a wallpaper motif. ‘Martin’s work is so much about how we live our daily lives that wallpaper seemed the most appropriate background to it, so we use it in two of the exhibition rooms and echo it on the leaflet,’ explains Feldmann.

Una found no problem working within the Barbican’s existing ‘brand,’ as director Nick Bell explains, ‘I have dealt with curators who automatically associate high design content with branding, a correlation that alarms me. When I think that we have an exhibition that follows the curatorial aims, placed graphic information that exposes the meaning of the exhibits individually and collectively in the given space without fighting with the exhibits themselves, then I think we might have something that is well designed. That we have made something accessible does not mean we have branded it, and the perception that we have is worrying.’

Origin to Evolve its toy products