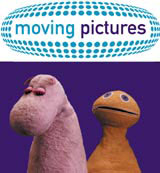 Middlesex print and Web consultancy Hey Moscow took part in a three-way paid pitch to create an identity and supporting promotional material for the British Film Institute’s new exhibition, Moving Pictures, a kind of Museum of Moving Images-on-the-go-show that will tour the country for two years while the film and television museum’s London home is refurbished.

The main problems faced by Laing and his team were time and budget constraints: one week to finalise the identity after winning the job and whatever wasn’t being eaten up by the MOMI reconstruction. But there were existing brand values that had to be worked in too. ‘We had to integrate the BFI’s corporate colours and brand into the new identity, which was challenging as we felt the current identity doesn’t really demonstrate the dynamism and future of British film and television. But we were lucky in working with a client that works with an open mind and understands the importance of design,’ he says.

The panoramic shape of the identity was drawn up as a visual representation of the huge span of film and television contained within the exhibition, an inclusive device aimed at appealing to as broad an audience as possible. ‘Nowadays people are more conscious of good and bad design, and so their expectations are higher. Public perception is a factor, especially when designing a major exhibition for the general public. People need to understand it and feel comfortable with it. You need to touch different emotions and provoke reactions without offending the individual. It is therefore vital that you understand your audience and give them what they expect and what they don’t expect,’ says Laing.

Moving Pictures will be on show at the Millennium Galleries, Arundel Gate, Sheffield S1 2PP from 14 February until 19 May