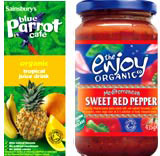 According to a Mintel report out last week, sales of organic food and soft drinks will break the £1bn mark this year, which represents growth of 35 per cent last year. The organic sector now accounts for 1.5 per cent of the total in-home food market, compared with 0.35 per cent in 1996.

But there are clouds on the horizon. The report refers to ‘growing negativity towards organic produce’, with a decline in the number of people who believe organic products to be safer and healthier than non-organic products. Penetration has remained static since 1999 and price is still a big turn-off. According to nutritionist and editor of Market Intelligence James McCoy, it will prevent organics from becoming more than a ‘niche market’. But the report cites new product development as the major factor in combating consumer negativity, by extending the range and convenience of products.

Sainsbury’s organic project manager Melissa Addey says the industry suffers from too many ‘me too’ products, brought out simply because rivals are doing the same thing. The antidote has been a series of product exclusives for the retailer, such as UK5 vodka and Papagayo rum. ‘Innovation in new product development gives consumers something to try and keeps concept designers happy. [Consumers] might try it and maybe come back for more,’ she says.

However, new product development is not a key factor in the organics market for Sainsbury’s chief organic buyer Anome Oyetey. He believes the emphasis is on maintaining consistent availability of organic products and differentiating from competitors in terms of quality. The game becomes one of logistics and sourcing. At Sainsbury’s 7 per cent of organic food purchasers account for 57 per cent of all the money spent in the category he says. ‘Our challenge is to get the other 93 per cent to buy more regularly without upsetting the 7 per cent.’

A recent supermarket development has been the layout switch from distinct organic counters and shelves to full integration into the rest of the store. Addey says that organic sales at Sainsbury’s increased as a result because consumers regularly came across organic products in the course of a non-organic shopping trip.

According to McCoy, this change demands a robust packaging response to catch the consumer’s eye. ‘Competition has increased, with products that might be cheaper and more attractive to children.’ The emphasis is on designers of organic products to come up with liveries that are distinguishable and fun. McCoy sees product development having a role in the creation of a comprehensive range of complementary foods. For example, organic frozen chips are more likely to be bought if the consumer can find organic tomato ketchup to douse them in.

Haines McGregor is working on product development and positioning for Rank Hovis Mc-Dougall’s Enjoy Organic brand, whose repackaged range has just hit supermarket shelves. Creative director Jeremy Haines says the criteria for the range have always been enjoyment, taste, health perception and organic ethics, in that order. No matter how laudable the sentiment behind organic, ethics are not a driving factor in food buying preferences and until designers understand that, organic food will always be the preserve of the ‘rope sandal brigade’.

Many specialist organic retailers rely on attracting customers through the interiors of their stores. The ‘in-store experience’ is more important than new product development, says Fresh & Wild marketing manager Peter Bradford. ‘The interior design of our stores is very much played down. The food and people are the heroes,’ he comments.

‘Integrity’, ‘disclosure’ and ‘transparency’ are words that recur a lot and the stores’ ‘grocery feel’ is intended to reflect these values.

Bradford also thinks, just as there is ‘me too’ product development, there is a lot of derivative design when it comes to organics. ‘When marketing men get hold of the word organic they come with lots of bucolic images,’ he says. He cites the award-winning Yeo Valley website, designed by Firehouse in 2000, as a good example of design that throws off the earthy and worthy Arcadian shackles. The ‘still evolving’ brand identity of Fresh & Wild will be tested in the next few months as the company begins piloting its range of own-brand products.

While the Mintel report cites product development, there are other factors at work that may harvest greater rewards for the designer. Parker Williams creative director Tamara Williams believes that consumers are now much more sophisticated about organic foods. From a design point of view, this means that products can no longer ‘look like they’ve been dug out of Farmer Giles’ land’. The work Parker Williams did for bottled spring water 1180, Williams claims, is a ‘contemporary, funky’ bit of product development that forced organics ‘kicking and screaming’ into the mindset of a younger consumer.

With the integration of organic produce and the increase in sub-branding throughout major food retailers, specialisation, rather than expansion, might just be key. The Sainsbury’s Blue Parrot CafÃ© children’s brand accommodates organic fruit juices, and the Marks & Spencer And More range of functional food seems ideally suited.

If the days of organic, low-calorie, nutand meat-free ‘meat’ will soon be upon us, then the design challenge will be to create packaging designs that reflect such a high level of individuation.

Sales of organic food will reach over £1bn in 2002

Organic food and soft drink sales account for 1.5 per cent of total in-home food and drink market, compared with 0.35 per cent in 1996

Organic fruit and vegetables account for 41 per cent of total market share in 2001, followed by dairy (16 per cent) and prepared foods (15 per cent)

Over 70 per cent of adults are potential purchasers of organics, with 29 per cent saying they never purchase these products

Penetration has remained largely static since 1999

Results are based on a face-to-face survey of 1000 consumers, carried out by Mintel during August 2001