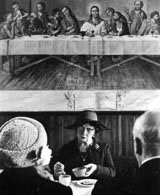 If you see only one exhibition this year, make sure it’s Martin Parr: Photographic Works at London’s Barbican.

A bold statement for the beginning of January, but, billed as the first major retrospective of this ace British social documentary photographer, the show is an opportunity to see Parr’s oeuvre, including unpublished pieces from his student days, in one go.

Put simply, Parr scrutinises ordinary people in everyday situations. He reveals them to be often greedy, ugly or possessing unfeasibly bad taste, but never out of context.

His uncompromising method has been called by some as intrusive, but as a documentarist, he is merely recording his own obsessions: the death of communities, over-consumerism, Britain’s decay under Thatcher, personal taste, peculiar British rituals, domestic life and the minutiae of everyday objects.

West Bay (1997), for example, covers many of Parr’s preoccupations: it features a pair of feet in clashing socks and sandals.

One of his earliest works, conceived with Daniel Meadows while at Manchester Polytechnic, is June Street, Salford (1972). The pair set out to find the ‘real’ Coronation Street and photographed residents of nearby June Street, with obvious fascination with their furniture and artefacts.

College, Parr says, was ‘the first time I was really enjoying myself with debauchery, drinking, smoking and eating curries – it was like landing in heaven.’ Small things made a big impression: ‘The idea of having your own darkroom and being able to smoke in it, I just thought was absolutely fantastic,’ he says.

Parr spent most of the 1970s living in the north of England capturing dying local communities. His black and white series Calderdale features a decaying rugby stand in Halifax (1977), and a dwindling congregation at Hebden Bridge chapel (1978).

Colour burst into Parr’s work in the 1980s as he rejected the decade’s vogue for black and white photography. The Cost of Living (1986-89) series focuses on the H

ome Counties middle classes. A heavily made up woman, with a grotesquely flared nostril, wrinkled neck and bony shoulder, plants a kiss on a balding man in Conservative Election Victory Party, Bristol (1989). It is almost too awful to look at.

One Day Trip (1989) magnifies his obsession with overt consumption as Parr accompanied a booze cruise to France. He then charts the ugly side of tourism on a global scale with Small World (1990-1995).

‘None of us like to be made fun of, particularly when it is the very way we live our life that is held up to scrutiny,’ reads the exhibition blurb. Parr shows us his world as it is and if it is too much to stomach then let it be a wake-up call. But honestly, if you will wear pink socks with orange sandals

Martin Parr: Photographic Works is selected by Val Williams and organised by Magnum Photos in collaboration with Barbican Art. The exhibition runs from 31 January to 14 April at the Barbican, Silk Street, London EC2