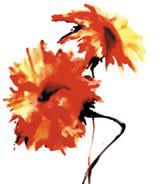 Not many painters would cite Radiohead, The Smiths or early Roxy Music as key creative influences, but as far as illustrator-turned-artist Andrea Byrne is concerned, they are just as valid as inspirations as her other guiding lights, artists Marlene Dumas and Antoni Tapies.

In fact, Byrne says there’d be no point in her even so much as picking up a paintbrush to embark on one of her large-scale floral canvasses without first putting one of their CDs on at full blast. They’ve certainly been booming out of her studio a lot lately as Byrne has been preparing for the Fresh Art show of emerging artists taking place later this month in London’s Islington, where she is exhibiting independently for the first time.

Now 41, she has come to painting relatively late after a successful career in fashion illustration. Originally from London, she studied fashion at Liverpool John Moores University and went on to win the prestigious Guardian Illustrator Award in 1987. She then found success working for a variety of magazines, ad agencies and clients including Burberry, Catherine Walker, Sonja Nutall and Dorothy Perkins.

While she still works as an illustrator, her painting has become more and more important. And unsurprisingly, it is heavily influenced by her background in fashion. Starting with nudes, she has moved on to representations of flowers, which with their flamboyant, dressy beauty and slender stems, seem closely related to the models from her fashion illustrations. ‘There is a real crossover between them,’ she admits.

She decided to move on to painting because of the challenge and spontaneity of getting it right straight off that it gave her in comparison with illustration, where she could more easily revise her work.

‘It wasn’t that I was bored with illustration, but I wanted something fresher and more challenging,’ she says, explaining that she has to be spot on because she wouldn’t be able to re-prime the canvas again to make adjustments.

Her work recalls performance – when she’s in the right frame of mind, she can just about paint around the clock. It’s all, she says, about energy. ‘You have to be hyper-confident. If I feel a bit down I wouldn’t go in [to the studio] because it wouldn’t work,’ she says. But even so, she’s not always pleased with the results.

The two immediately defining characteristics of her paintings are size and subject. She paints flowers – lush, gorgeous blooms in an impressionistic rather than realist style, choosing them not so much because of their aesthetic quality, but for how they make her work: ‘I love flowers, but my main love is speed of line and continuity. It’s a big challenge, as you only have one hit.’

‘If I go any smaller it can look a bit twee,’ she explains. There’s nothing twee about the distinctive names she gives to her latest paintings – on the contrary they are distinctly sensual and evocative, but at the same time playful.

A richly gold/orange-hued bloom is named Honeyshiva while her painting of a bunch of pink/purple flowers is Purrpoodle. Other paintings get equally exotic, teasing names such as Rubygarland and Tinglenlolita.

Her painting and commercial work recently came together with a large painting project for Aquascutum’s latest advertising campaign and London shop windows. And while she still has the intention of doing both painting and illustration, her energies lately have certainly been devoted to painting.

As well as Fresh Art, she has a solo show coming up in November at the Hicks Gallery in Wimbledon. Particularly popular with people who work in the media, her work will be on sale at Fresh Art from around £1150 rising to £1850. Byrne shows no sings of running out of energy, given, of course, the right musical conditions to do her painting in: ‘I still feel it’s very, very fresh. I still feel new to it.’