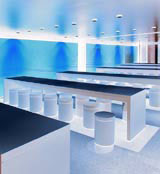 What a long way a bit of paving and a flight of steps can get you. Particularly when these humble ingredients are given massive topspin by none other than London’s mayor, Ken Livingstone. Because when you look at the ‘new’ Trafalgar Square as tiddled up by Lord Foster’s practice of architects, there is really very little to see. It is a traffic management plan, a part-pedestrianisation. That’s all. But its impact – good and bad – is enormous.

Closing off the north side of the square to vehicles, so creating a broad terrace in front of the National Gallery, is a boon. That’s the paving – nice big stone slabs. Then this terrace is connected down to the square below via a broad flight of stone steps that did not previously exist, on an axis with the central portico of the National Gallery.

Apart from a pair of discreet bronze-framed glass lift boxes placed either side of the steps for disabled access, and some rather horrible blobby benches, that’s the extent of the visible design. The rest is all down to the way the traffic now flows round three sides of the square instead of four. It’s a relatively complex thing to work out, but it is standard stuff, the bread-and-butter of highway engineers everywhere.

The changes made to the physical fabric of the square may be minor, but they give the place a strangely unbalanced air. Nelson’s Column at the southern end, with its four Landseer lions, forms a triangulated composition with the two great fountain pools by Sir Charles Barry, with their Lutyens centrepieces, set on what was the half-way line of the square.

Now that a great big staircase has been cut through what was previously the stone retaining wall on the north side – and is continued by the new terrace right up to the National Gallery – the upshot is that Trafalgar Square has changed shape. It has become visually much longer in the north-south direction. It is less contained. The fountains and Nelson consequently feel weirdly as if they have been shoved further south.

The design poses another conundrum. The new steps rise to the terrace in front of the National Gallery, which in turn butts up against a blank stone wall. Because there was always a busy road here, the National Gallery’s original architect, William Wilkins, had no space to put a grand flight of steps up to his portico. So he put cramped little staircases on either side instead.

The gallery’s present architects, Sir Jeremy Dixon and Ed Jones, propose putting this right with a new ziggurat of steps. That way, you would be able to walk in a straight line from the square below via the new terrace and up into the gallery without having to make a dog-leg. There is logic in this, but beware: if it is done, it will make the square seem even more elongated. It will become an axial cascade, so different from Barry’s much subtler arrangement of 1845.

Looking at the Foster alterations makes you realise just how clever those Victorian and Edwardian architects were. Now he has thrown everything out of kilter, there is only one visual solution: move Nelson, the lions and the fountains north a few yards. I can’t see it happening, can you?

Zefa senses that latest offering is on people’s minds