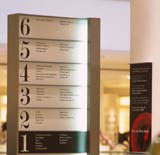 ‘I’m the fourth generation in my family to shop here, and I’m delighted with the changes,’ says one entry in the comments book. ‘I’ve been coming here for 30 years, and will probably haunt Peter Jones when I’m gone,’ reads another.

Such remarks are revealing: the immense, five-year refurbishment of John Lewis’ most charming London store was no ordinary re-design. The clichÃ© of it being ‘Chelsea’s corner shop’ has worn thin, but the new look still had to meet the exacting standards of Peter Jones’ target audience – well-heeled dames in their 60s and 70s, for whom Peter Jones is a home from home.

I corner a couple of them in the lift. What do they think of McAslan & Partners’ refurbishment? ‘Lovely, very modern. But I get a bit queasy if I stand too close to the edge in the middle,’ says one. And did they ever stop coming, even throughout the disruptive work – one of the store’s main fears? ‘Oooh, no. Never,’ they coo.

The central atrium, is indeed, awe-inspiring, particularly if you glance upwards from the ground floor. Now opened up to the full height of the building – seven floors, from a previous two, it floods the entire store with natural light from 64 square window panels in the roof. The interior is white, and the waist-high walls around the atrium’s edge on each floor are inch-thick glass, complemented by a brass handrail that matches the gold edging around the building itself.

Enter by one of the King’s Road entrances and you’re greeted by a bespoke, organic sculpture, Sprig, by rising star Junko Mori, which snakes up to the ceiling.

It’s all very 1930s, with more than a nod to the store’s heyday decade, during which it was voted ‘Best Building of the Year 1939′. It was renovated at that time by Modernist architect William Crabtree under the watchful eye of John Spedan Lewis: a good-looking social revolutionary who was handed the reins of Peter Jones in 1914 from his father, the original John Lewis. It was Spedan who introduced John Lewis’ partnership concept. It was his ‘experiment for a better way of managing business’.

Partner of 36 years Geoff Pilgrim recently retired, but has never worked anywhere in his life but Peter Jones. He explains that, during the renovations, no-one realised the centre of the store had been gouged out. Or that clever hoardings hid the fact that shoppers had to step out of a window and back in again on a temporarily constructed route. Just as well, really, or the queasy lady in the lift may never have returned.

Navigating the interiors is easy, thanks to logical escalators (Dickens & Jones Regent Street take note), smooth, chrome lifts and fool-proof signage by Pentagram. These are lit by a sumptuous pink sidelight, the only real colour around apart from white, and – perhaps with the visually-challenged dames in mind – each floor has a giant number you can’t fail to miss.

But I’m being a touch unfair. Among the coiffed ladies, I spy just as many young Chelsea girls out shopping with Daddy’s money, and I’m a regular shopper and still in my 20s, just.

The best thing about Peter Jones is that it doesn’t feel like a John Lewis. The green has disappeared and there’s none of that white speckled linoleum flooring. But the biggest attractions remain: an addictive kitchen shop, a good spread of brands, particularly cosmetics, its price promise, and experienced, helpful staff. Long may it continue.

Mr Summerhill, this is your late night wake up call

Arnold left out of Havas loop