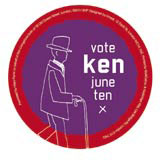 The elections are upon us again this week, and with them comes the inevitable flurry of posters, advertising, stickers and badges.

This year’s campaigns are noteworthy for the range of creative approaches and, for the most part, are surprisingly unmalicious. The Labour Party has opted for a multi-pronged offensive by Omnicom-owned TBWA London.

One treatment extols the party’s achievements – more doctors and nurses, lowest unemployment for 29 years – in block type and vivid colours. Another shuns Conservative Party policy with vignettes of opposition figureheads.

The Conservative Party also looks set to adopt a mix of approaches. In April it held a controversial, unpaid ‘competition’ for design ideas, which generated 3000 submissions.

A decision has not yet been made on the winner, but the party will shortly select two pieces of work out of a shortlisted 30.

In the London mayoral race, Incumbent mayor Ken Livingstone has taken an upbeat, ‘inclusive’ tack this year. Line illustrations of Londoners, art directed by Unreal, aim to celebrate the city and its people (DW 6 May).

The Electoral Commission – the independent body that regulates the UK’s political parties and encourages people to vote – has also sought to engage the public through a simple, graphic campaign. Illustrations of everyday objects – a pint glass, an egg – are accompanied by explanations of how politics affect people’s lives.

If there is any thread running through these campaigns, it is that the vitriol of past years is largely missing. Voters hoping for 2004 variants of a red-eyed, demonic Tony Blair or William Hague dressed in Thatcher chic could be disappointed.

It is a conscious decision. ‘Reductive, negative campaigning doesn’t work at the moment. Things have moved on,’ says Conservative Party marketing director Will Harris. ‘What we need to do is make people more aware of the issues, and do it with a stiletto rather than a sledgehammer. A twist of irony and a bit of humour work quite well.’

Harry Barlow, communications adviser on Ken Livingstone’s re-election campaign, agrees. ‘We never [lambaste] the competition, Ken doesn’t allow us to do that. And I think he’s right. It reduces the level of debate to a slanging match. It’s easier to do that, but it’s more positive to show the things we’re going to do [if re-elected].’

The Electoral Commission is convinced that a positive, personalised approach in political communications is more effective than mud-slinging. Last autumn, it conducted research with Mori into the public’s opinion of politics.

‘The concept of politics turns people off. They imagine old men shouting at each other in an ancient hall in Westminster,’ says campaigns manager for The Electoral Commission Becky Lloyd. ‘People do get really worked up about issues, though. [Voter] turnout goes up when people feel the elections will affect something important to them.’

Fortunately, the creatives behind this year’s campaigns are also in favour of the warm and fuzzy campaign approach. Unreal head of design Brian Eagle is lukewarm about ‘slagging off’ the opposition.

And though he believes that the British public still has an appetite for a ‘good old whinge and a knock’, Phoenix creative director Pete Hammond has little time for it himself. ‘You should always play up your own strengths rather than the weaknesses of the other party,’ he says.

Last month, Phoenix had three pieces of work (one pictured below centre) shortlisted in the Conservative Party’s competition.

But harmonious views on campaign communications has not always ensured smooth sailing during their development. Despite quick creative turnaround, Eagle says work often went back and forth for some time until a satisfactory solution was agreed on by all interested groups.

‘A lot of work [on Livingstone’s mayoral campaign] got rejected, because it had to go through Labour to get its support. A lot of people had to give their two pennyworth,’ he explains.

Lloyd admits that The Electoral Commission also spent ‘months and months’ on its campaign. ‘We ended up with five different approaches and put the whole lot into qualitative research,’ she says.

The emotive nature of politics also makes the client-creative partnership uneasy at times. ‘It’s important to believe in what you’re doing. We couldn’t have done our job well if we hadn’t been passionate about it,’ says Eagle.

Hammond agrees, up to a point. ‘Political allegiances aside, I think it’s good to be passionate about the work you’re doing,’ he says. ‘But, on the other hand, there’s a real professional angle. Everyone here came at it [the Conservative Party campaign] from that angle. I do think it’s possible to detach yourself. These are political parties, not cigarette manufacturers.’

Hammond says voter, rather than creative, involvement with political campaigns is critical. ‘We have tried to connect with people’s concerns in a really simple way. The work is a little tongue-in-cheek, a little clever, but not so difficult that you struggle to understand what’s going on,’ he explains.

Eagle would have liked the mayoral campaign to have reflected more of Livingstone’s personality. ‘It was targeted at all Londoners, so it was important to be obvious and accessible. We couldn’t be too fancy with the design work,’ he explains.

Local elections in some parts of England

Break new ground if you want to change perceptions

Consistency is the goal