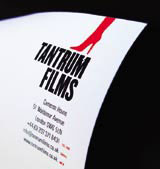 Unreal has designed the identity for fledgling film company Tantrum Films. The marque, which depicts a woman’s heel splintering the logotype, draws on the concept of a ‘stroppy actress’ to create a dark and playful feel, according to consultancy head of design Brian Eagle.

On the strength of its identity work, Unreal has also designed the collateral promotion pack for Tantrum Films’ first full-length feature. A Way of Life, a tale of ‘murder, poverty, love and hurt’ set on a Welsh housing estate, is due to open this autumn.

Break new ground if you want to change perceptions

Fitch sheds jobs as it restructures