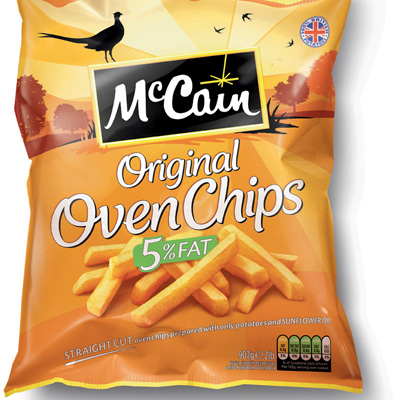 Brandopus has created a new look for chip brand McCain, which will be used across the brand’s entire portfolio.

The consultancy, which was appointed to the work directly in May 2010, says it has adopted a ‘rural’ theme for the range, after being instructed not to alter the McCain logo.

Brandopus has also restructured the McCain portfolio to improve integration and ease of navigation across the range. Paul Taylor, creative director at Brandopus, says, ‘We’ve given the range a much more single-minded design.’

Taylor says, ‘The biggest issue that we had to address was that people hadn’t been choosing it as a brand, instead they were choosing individual products.’

The consultancy has created a rural landscape theme for the McCain packaging, with sunbeams emanating from the McCain logo to spread across the pack.

Taylor says, ‘We wanted to get across a sense of naturalness that was already established in the brand. Previously, the depiction of naturalness had been rather literal – showing images of potatoes, for example – and we wanted something that depicted the theme less literally.’

He says, ‘There had been an issue with where the products stood. We realised we could brand things in clear areas.’

Mark Hodge, head of brand at McCain, says, ‘[The new identity] successfully communicates a real sense of naturalness, warmth, confidence and feel-good, which is exactly what the McCain brand is about.’

He adds, ‘In addition, the new ranging structure really clarifies and simplifies the portfolio and ultimately provides an exciting platform to drive brand growth in the future.’

CSD changes bylaws in bid to set up register

The art of food

Luke Miles to join Virgin Atlantic as head of design