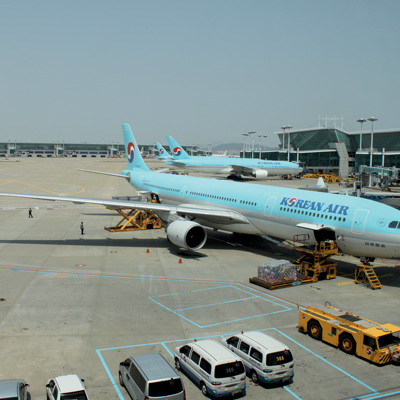 I am inspired by travel. When I was young I travelled with my grandfather. After he retired he wanted to see the world, and my grandmother didn’t like flying so he took me instead. We went to Russia, Italy, Turkey, Greece and China, among other places. This was during the late 1970s and early 1980s, when foreign travel wasn’t quite as easy as it is today.

China in particular was an incredible experience; it was like going back in time to the 1950s. I’m very lucky that I still get to travel with my work. I’ve worked on British Council projects in Kenya, Portugal and South Korea where, on the latter, I worked in collaboration with Michael Marriott. We recently spent a week in Milan installing a show together and will collaborate again during my studio residency at Pick Me Up at Somerset House (from 17-27 March).

Travel is much easier now and some of the glamour is gone, but I still feel excited when I have to wake up early in the morning to go to the airport to catch a flight, not knowing what I’m going to see or who I’m going to meet at the other end.