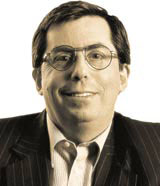 The best business theories, like the best laws of science, are very simple. Ideas that can be stated simply and applied universally have always looked good written in chalk. Yet despite their significance, they can sometimes never leave the blackboard.

Differentiating your design business from the rest of the market is a considerably undervalued concept. This might sound like stating the obvious, but most “no-brainers”, as you might call them, usually are. A quick look at highly valued consultancies such as Wolff Olins or The Partners and you can appreciate how differentiation counts for, well, just about everything. To be special you need to be different.

This needn’t be about simply attaining a “premium” status, albeit the ubiquitous challenge. There are plenty of other ways of differentiating the design consultancy business at a strategic level, to create competitive advantage.

Back in 1988, two ex-Unilever marketing directors, Peter Dart and Mark Sherrington, spotted a gap in the market for servicing fmcg businesses. The Added Value consultancy was born and shortly afterwards came its sister design group Brown Inc, which became Brown ID. From the very beginning, the two groups were joined at the hip. Each would feed off the other in splendid symbiosis, often winning client work through the support of the other.

“The differentiator – the competitive advantage of each company – was the other,” says Dart more than a dozen years on.

Back to the present, and the pair have now hit the expansion trail, following their merger into Tempus Group in November 1999. The acquisition, in November 2000, of South African multidisciplinary design group KSDP has seen Tempus helping to relaunch the merged Brown KSDP as a full service, global branding and identity business with its eye on the big league. All Brown KSDP wants now is a partner in the US to complete the picture.

An integrated approach (Brown KSDP is the only branding consultancy in Tempus) still echoes the relationship between the marketing and design business founded in 1988. The Tempus partners, it seems, remain fixed on differentiation. But at the giddy heights of the marketing network world, some would say this is a rare thing indeed.

Dart, now president of Brown KSDP and a director of Tempus Group, feels that the traditional marketing services network model is somewhat beleaguered. The point is giant networks like WPP Group or The Interpublic Group are run as classic b

usinesses, rather than as forward-thinking marketing organisations. That they are not run by marketing specialists, goes the theory.

“As you can imagine we talked to the boys around town [before the Tempus deal] and didn’t like much of what we saw because we felt that it was too much about cogs in a machine,” says Dart.

“They are driven too much by results, too much by the share price, too much by business people rather than somebody at the top being passionate about branding, or marketing, or the consumer, or any of those things,” he says.

Chris Ingram, founder of CIA MediaNetwork and now chairman of Tempus Group, was the first person with an “interesting and different” proposition, continues Dart. The deal was done with the Added Value Group founders being remunerated largely in Tempus shares.

Dart is clearly passionate about retaining the independence necessary to continue Tempus’s marketing and branding crusade.

“There is not enough marketing going on. The debate around the boardroom table is not centring on how we grow our brands, how to make it more exciting and how we get ahead. Done well, [branding] is about inventing the future,” he says.

“So many people at London’s big corporations are business people who find it much easier to look at costs, than use their imagination to grow revenue,” Dart adds.

Despite this, and somewhat ironically, the WPP Group has been a passive shareholder in Tempus since the mid-1990s.

But for now Dart predicts that corporate identity is going to be the “biggest and fastest growth side of the business” for the next two years.

“We know, from the work that we are in the process of getting and about to get, that the corporate identity projects are going to be a huge source of growth,” he suggests. The biggest challenge, perhaps, will be making all this differentiation count at the execution level.

And that is up to Brown KSDP.

Differentiating your consultancy the Tempus way

Integrate your skills and offer integrated services to clients

Put consumers at the centre of the equation

Channel and media selection is increasingly important for brand owners; advertising is less and less effective

Engage and involve the people within the organisations you work with