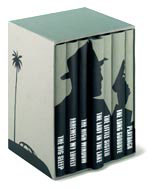 Details have been released of nominations for this year’s British Design & Art Direction Awards.

Wolff Olins is competing head-to-head with ad agency Mother in the corporate and brand identity category over the Tate and Costa Coffee identities, respectively.

Innocent bottle labels, created by the in-house team, and Harcourt Mallet’s alternative calendar for the Hook Norton Brewery are competing in the writing for design section.

Royal Mail Millennium Stamps, by CDT Design, Pentagram, Rose Design Associates, Roundel and Tutssels are nominated in the communication arts section. However, D&AD awards director Louise Fowler confirms that it is not the same set that won silver last year.

“The [previous] Millennium stamps were an illustration-based sequence of stamps for 1999. This year, the photography-based sequence produced for 2000 has been nominated for a Silver Award,” she says.

There are five editorial and book design nominations. They include the Tuna Book by the Partners for Marcus Lyon/ The Glassworks; Omnific’s Common Worship 2000 for the Church of England; Life Style by Bruce Mau Design for Phaidon Press; and Atelier Works design for The Mennonites, also for Phaidon Press.

There is only one nomination for design consultancies in the illustration category: Geoff Grandfield’s work for the complete novels of Raymond Chandler for the Folio Society.

However, there are no design consultancies among the three nominations in the typography category.

Jury foreman Vince Frost, managing director of Frost Design, explains the jury’s decision. “There was nothing that knocked us out or was worthy of a silver nomination in typography for design this year,” he says.

Williams Murray Hamm has collected three of the five nominations in the packaging category for Heal’s vinegar, Heal’s oil and Interbrew UK’s Wildbrew.

Five projects have been nominated in the environmental design and architecture section, including: Marks Barfield for the British Airways London Eye and Comment by Casson Mann/ Itch for the Science museum.

The winners will be announced on 30 May at Earl’s Court 2.

The grass is greener at new drive-through joint