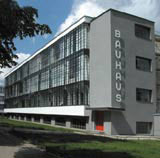 I have many design heroes – Paul Rand, Charles Le Corbusier, Robin Day, AM Cassandre, Raymond Loewy, William Morris, Christian Dior, Gerrit Rietveld, Charles and Ray Eames, and, of course, the living legend Alan Fletcher – but one abiding influence that has informed my whole career is the Bauhaus movement and all that it represents.

Bauhaus brought together designers, artists and craftsmen to create something that changed the world they lived in. Walter Gropius created a school of real collaboration and a method of allowing designers to interact. Creatives such as Herbert Bayer, Marcel Breuer, Mies van der Rohe and Josef Albers inspired each other to work better, as only scientists had done in the past. Indirectly, I became a beneficiary at Yale and was taught by Albers. I found him to be a truly inspirational teacher as well as a design giant.

Like the Bauhaus collaborators, I have always worked with designers from many other design disciplines – to create something that is more than we could achieve individually. The Wembley Stadium identity and wayfinding project we undertook is a classic example of this kind of collaboration. When I set up the Michael Peters Group, and more recently Identica, Bauhaus was the inspiration for its vision. It is still the template for the modern, multidisciplinary design consultancy.

Learning from and collaborating with other talented, creative people is an unbelievable inspiration. It has allowed me to lead design groups underpinned by a unified, collaborative creativity.