When signage goes wrong, the results can be highly amusing for the public, but costly for clients. Doug Lansky shows why they ought to invest more in signage, with a book of interesting and amusing examples from around the world. Trish Lorenz goes signspotting

Signage schemes that have gone wrong probably shouldn’t be a laughing matter, but sometimes there’s really no alternative. Whether it’s down to the nuances of language, as in the ‘Lhasa reception centre for unorganised tourists’; an interesting choice of name, like ‘The Yelling Dentist’; or navigation gone mad – ‘to turn left turn right three times’ – signage is uniquely placed to drive us to distraction with a smile on our face.

And if you have ever been bemused by signage, Doug Lansky’s new book Signspotting will strike a chord. Lansky is a traveller, not a designer, but, as the title suggests, he’s got a thing for signs and his book highlights the amusing, absurd and bizarre results of signage gone wrong around the world.

There are some great examples of signs confounded by translation difficulties. Designers working on international schemes would do well to consider El Guacashito, the less than aptly named snack bar in Guatemala, when dreaming up names for overseas markets.

But, even for native English speakers, language use seems to be a challenge. Lansky advocates the creation of a public syntax bureau, and he might just have a point, especially when you see a South African sign that reads, ‘Do not feed the elephants, it creates management problems’, or a US sign that highlights ‘drive up parking’.

The search for brevity, that created ‘Stop here when flashing’, could perhaps do with a little copywriting finesse. And proof reading is obviously important, or you might just end up eating ‘Sweat and Sour Pork’ in Sydney.

If you ever get the feeling that signage designers think the rest of us are a bit thick, you might be right. ‘Caution, falling snow and rain’ and ‘Don’t walk in front of moving traffic’ truly seem to be cases in point. Others take too literal an approach – signposting the way to a ‘Secret Nuclear Bunker’ is more like Austin Powers than James Bond.

Alex Wood, of signage specialist Holmes Wood, says she has seen ‘loads of examples’ of signage gone wrong. ‘I think it’s often to do with everyone taking ownership of a scheme and randomly putting up signs,’ she says. That might explain the ‘No left turn’ sign, posted directly below a ‘Left lane for Reno’ sign in the US, or the Californian wayfinders who signposted an ‘evacuation route’ underneath a ‘no through road’.

Wood says her personal favourites include a Tate Galleries request for a vinyl door sign that simply said ‘Stools’, and the request for an alternative female toilet pictogram, from a client who thought women should not be defined by wearing a skirt.

Designers across all disciplines are signspotters – though their concerns tend to be aesthetic, rather than linguistic. Bull Rodger managing director Paul Rodger is an identity and print specialist, and says he has a ‘bee in his bonnet about appalling typography and the ubiquitous apostrophe’, that he believes abound in modern signage schemes.

He points to signs that consist of ‘nothing more than a useless bit of Perspex and hideous Brush Script typeface’ and contrasts these with Eric Gill’s ‘delightful’ signage for Broadcasting House, ‘which is really a part of the building’. 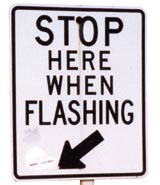 ‘Developers spend millions on a refurbishment, whether it be a shopping centre or residential scheme, and then ruin it with poor signage,’ Rodger says. ‘Signage is such an important part of the built environment. It is semi-permanent, not ephemeral, and that makes [errors] even worse.’

Mistakes can happen in every medium, but when they take place on signage schemes, they somehow have greater impact. As Lansky points out, ‘We’ve all caught typos in books and magazines, and when a flagrant error is flapping about in a public space for all to see, you think someone will point it out. But it’s not always easy to bring it to the attention of those responsible.’

Lansky’s book isn’t really a tool for designers – more a compendium of hilarious horrors. But if you have a signspotter in your life, it might make a fun Christmas stocking-filler. Or perhaps you could send it to the next client you work with, who thinks signage schemes are a piece of cake.

Signspotting, by Doug Lansky, is published by Lonely Planet this month, priced at £5.99

Redpath to work with the Scottish Museums Council