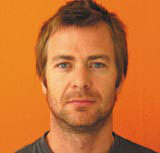 Bored with photographic illustration, Stuart Haygarth made a chandelier out of discarded party poppers. It went off with a bang at Designersblock and he is now forging a new career, says John Stones

Most people, by the time they have reached their late 30s, have decided what it is that they do. For better or for worse, they stick with the colours they have nailed to the mast. In Stuart Haygarth’s case, this would have meant continuing as a commercial photographer, creating book covers and photo-montages for the likes of Esquire, DaimlerChrysler and Penguin. But, after 15 years as a photographic illustrator, Haygarth felt he was ‘getting jaded and stagnating’. At the age of 38, it was, he jokes, his mid-life crisis. He says he ‘wanted a new approach, to regain the creative excitement [he] used to get’.

The result of this soul-searching is a series of chandeliers, shown to great acclaim at Designersblock in London in September. Exquisitely detailed, and kaleidoscopic in effect, the chandeliers reveal themselves, on closer examination, to have been constructed out of banal objects – either rescued objects, such as broken glass washed ashore, or the overlooked and cheap, such as plastic champagne flutes. The Millennium Chandelier, for instance, is made from party poppers suspended on fishing line. The poppers had sat in bin liners for four years, awaiting a purpose, since a stroll, on the first day of the Millennium, opened Haygarth’s eyes to their potential beauty and historic resonance.

Haygarth coyly suggests that he is not quite sure why the chandeliers came about, but the first, the Shadey Family, was created to hang above his own kitchen table and consists of a seemingly random selection of glass shades. The others quickly followed. Haygarth had them installed in his studio for a while, so he had already received plenty of positive feedback before he approached, and was accepted by, the organisers of Designersblock.

Nevertheless, he wasn’t sure how they would go down with a wider public, given his professional expertise in photography and formal education in graphic design (at Exeter College of Art & Design). ‘I was a bit hesitant about showing them, as I didn’t come from a product design background,’ he says.

It may be a fair hop from photography to chandelier design, but all of Haygarth’s work shares a central theme of collection, be it in the form of a photographic collage or an assemblage of found objects. Haygarth says he has always been an inveterate collector, categorising and re-categorising objects into formal divisions, such as a blue objects, or clear and so on, before deciding how to use them. The Tide Chandelier, for instance, is made up of objects that were washed up at Dungeness Beach in Kent. ‘It made me realise what a state things are in,’ he says. But, like the work of south London duo Committee, Haygarth’s chandeliers wear their ecological concerns lightly. The work is as much about the forgotten, potential beauty and careful design of discarded objects, such as bottle tops, as it is about our disregard for the environment. 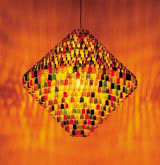 While he describes himself as ‘overwhelmed’ by the positive reception his chandeliers got at Designersblock, which he is now selling in limited editions, Haygarth definitely doesn’t want to be typecast as ‘the chandelier-maker’. Apart from keeping his hand in with commercial photographic work, he is also planning a table lamp and another project that will reunite his two creative strands – a book that takes, as its starting point, objects confiscated from hand luggage at Gatwick Airport. It took some six months of patient negotiation with different airports, but Haygarth was finally rewarded with two weeks’ worth of booty. Those nail clippers in your hand luggage, that were so aggravatingly taken from you, could now be immortalised.

Haygarth is unsure whether to call himself a designer, illustrator or artist, but perhaps the reassurance of such definitions is not what he is about. The same relaxed, experimental approach and openness to change that characterises his work, is evident in his decision to up sticks and move to Berlin with his German partner and eight-year-old child. He says, ‘I hope I will keep changing, but collections of objects will always be part of what I do.’