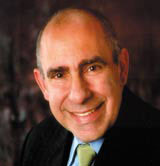 Celebrated editorial designer Mario Garcia has just completed his most recent redesign – a compact international edition of the Wall Street Journal. Simon Esterson talks to him about the future of newspapers and just how small they can get

Simon Esterson: Some people see the redesigning and reformatting of newspapers as their last death throes – that desperate moment before on-line media make newspapers redundant. Are you pessimistic about the future of the newspaper?

Mario Garcia: Pessimism has never really been in my vocabulary. But I hear all this constantly and I am very well aware that, for example, here in London, when The Independent became a tabloid, it was no secret that this was a paper that was struggling to survive. Maybe those were its motives and it was able to get another fresh breath of air. In the case of The Times, of London, it may have been losing readers, but it was definitely not dying. That is also the case with the Wall Street Journal’s international editions.

Newspapers are always going to be around in some form or another, preferably smaller. Eventually A4 is the format that many will settle for, within our lifetimes. I think size change is one step to make sure you actually make the newspaper more manageable and more accessible. What the Wall Street Journal is doing, with this fusion of print and on-line, is really a recognition – we know you read on-line and we know you go to the Internet several times a day, so we are going to send you there from the paper, and link you to the website.

Journalists feel that, as you change the page size, the kind of newspaper you make changes too.

The ultimate determinant of all this is the content. Were the stories cut in the new WSJ? Of course they were – you don’t simply shrink a broadsheet into a tabloid. I use the analogy that if you live in a ten-bedroom, palatial home and then you decide to move to a three-bedroom townhouse, you’ve got to sit there and take stock of everything. Do I take grandma’s grand piano or is it time to sell that and get a new digital piano that occupies less space? You’ve got to prioritise and make choices. This was not a shrinking of a broadsheet – nor is it the WSJ going tabloid. This is adapting the WSJ, as we know it, to a new format.

So, is that at the heart of what you do – fly around the world getting editors and journalists to re-examine what they put in their newspapers?

Absolutely. None of this work was done in a graphics studio for aesthetic purposes. I have nothing against that process, but it wasn’t done that way. I am trained as a journalist and I prefer to work from the text. We spent an entire five-day workshop on the story structures. At the end of this process, I came to the conclusion that almost any newspaper should go through the exercise of pretending it is going to be a compact – just to clean the house, to get rid of the old furniture.

It’s for a young audience of 16- to 25-year-olds. It is a new sort of newspaper, created for the digital age. You have a lot of images. In the world section, you tell a lot of stories with only a photo – torrential rains in Kashmir, the photo and five lines. No story, nothing else. But that is for a very specific market and it’s been successful, selling 180 000 copies a day. And it was born this year.

I have three new newspapers that will be born in 2006. On paper! Brand new babies! They come into the world as newspapers, all buying new presses. No, newspapers are not going to die, but the new ones that are coming out are very different – and all of them are A4, by the way. I think if I am in a position to do a new newspaper, my first conversation with the publisher about it is, ‘Can we make it this small and not even a tabloid?’

But making everything consistent and over-designed can be the enemy of strong, content-based journalism, can’t it?

Oh yeah. I think that you have to have, even in the most organised paper, some elements of, what I call, systematic chaos. Papers mustn’t become totally sanitised and decaffeinated, with everything in its place. The world is not like that. In this world of tsunamis and hurricanes and all that, the pages have to bring some of that stormy force, because the readers’ world is not so perfect.

If one issue is about changing formats, the other big battle is free newspapers versus paid-for newspapers…

…so, if you look across Europe, the lower- to mid-market is being completely restructured by the free commuter papers, such as the Metro and 20 Minutes. What implications do you think they have?

I think the free newspapers are a catalyst in making the rest of them look at the compact format. Also, the free newspapers are heaven sent, in that they put paper in the hands of people who might not otherwise consider paper. And, any time you get paper in the hands of someone who does not care for paper, newspapers everywhere win. But, in the next decade, papers like Metro will be going for the throat. They are going for a more sophisticated reader – elite readers, who read the WSJ, the Financial Times and The Times. In Washington, we have the Washington Examiner, which distributes in the morning, in your front yard, to households with an income of more than $100 000 (£56 000). That’s the Washington Post’s readers. It is beginning to develop a heart, as well as editorial pages, opinions and ideology. The Examiner is conservative and pro-Bush, compared to the liberal Washington Post. I mean, once you get into ideological issues, once you go for the reader who reads longer pieces and you hire journalists…

So what’s the future for the paid-for media then, if we’re going to see free newspapers across every market sector? 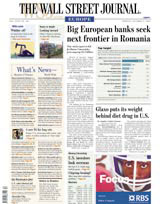 Garcia on the Berliner-size Guardian:

I’m one of the ones who like it. I like the spirit of it, I like the colours, I like the ability to navigate through it and it uses photos well. But I would like to see bolder headlines. I remember how it used Helvetica. To me what I miss the most is the trombones – right now they’ve decided to do violins. I think that it just needs to turn the volume up a couple of notches. But I think it’s elegant and contemporary.

Garcia on The Times:

I prefer The Guardian’s remaking. The Times is beginning to use bigger headlines and their photos are getting bigger too, so it looks like a tabloid – on the inside, not on the cover. The amount of text on the front page is a waste of wonderful display opportunities. They need to go for more headlines and less text on the cover. Also, this is a logo that is crying out for the background in colour, with the letters in white or something like that.