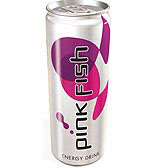 Madrid-based Addison Espana has created the look for Cadbury Schweppes energy drink brand Pink Fish, which will go head-to-head with the market-leading Red Bull, initially in Spain, but potentially across Europe.

The consultancy has created the name, identity and packaging for Pink Fish, which is the first of three soft drink projects it is working on for the client, Cadbury Schweppes Bebidas de Espana.

The taste of the original Pink Fish product is similar to the Red Bull mix, according to Addison Espana project director Clair Canning. But the consultancy is now working on pack design for a flavour variant that Cadbury Schweppes hopes will be a far more distinctive offering.

‘Pink Fish is being clearly positioned as an alternative to Red Bull,’ says Canning. ‘But it’s not quite so linked to nightlife and dance culture as Red Bull is. Schweppes is a more conservative company and its brand is not so radical.’

Among the criteria for the choice of name was the fact that it needed to be memorable and easy to pronounce across Europe. ‘More aggressive and nocturnal-sounding names like Rip’ were discounted for being too ‘short and sharp’, Canning adds.

The final choice of name reflects the client’s determination to offer direct competition to Red Bull. A young, urban and trendy audience is the primary target for Pink Fish, which will be strongly promoted in Spain around pop concerts and other musical events.

The design of the new flavour pack will involve changes to the colour background and the introduction of a graphic element to highlight the new ingredient.

Addison Espana designers Judy Willer and Luis Echanove worked on the project. The consultancy won the work after a three-way pitch in January.

Founded in 1988, Addison Espana underwent a management buy-out from Addison Worldwide in 1994.