General Motors (GM) has unveiled a new logo and updated identity in the hopes of reinforcing its electric vehicle (EV) ambitions.

Established in Michigan, US in 1908, GM is the parent company to brands including Chevrolet, Buick, GMC and Cadillac. It also has international ventures such as Chinese marques Wuling and Baojun.

The new identity is accompanied by GM’s “Everybody In” electric vehicle campaign, which lays out its plans to help reduce emissions and build an “all-electric future”. The car company says that it will invest $27bn (£20bn) in EV products over the next four years, as well as launch 30 new EVs globally by the of 2025.

Another focus for the company will be its Ultium battery, which GM says will be the foundation for its next-generation line up. The battery will be able to deliver an EV that can go up to 450 miles on full charge, according to GM.

“The clean skies of a zero-emissions future”

The new logo aims to combine heritage while also bringing a “more modern and vibrant look to GM’s familiar blue square”, the company says. It has been designed by GM’s in-house design team.

While the square shape has been retained, “GM” now appears in lower case. The lower-case font and its rounded edges are an attempt to create a “more modern, inclusive feel”, GM says.

The redesign also aims to be better suited for a “digital-first environment”, GM adds, in keeping with recent trends in the car branding sector.

GM’s logo was previously blue and this shade has been kept for the update. The shaded gradient now “evokes the clean skies of a zero-emissions future,” GM says. There is also a flat version of the logo, with just a single shade of blue.

The updated logo also aims to tie in the Ultium platform. The underline of the “m” not only links to previous GM logos but also represents the battery range, according to the company. The negative space underneath the “m” is a reference to the shape of an electric plug.

GM executive director of Global Industrial design Sharon Gauci says: “This was a project our team took so personally, not just for ourselves but for the 164,000 employees this logo represents.

“At every step we wanted to be intentional and deliberate because this logo signifes creative and innovative thinking across the global GM family.” 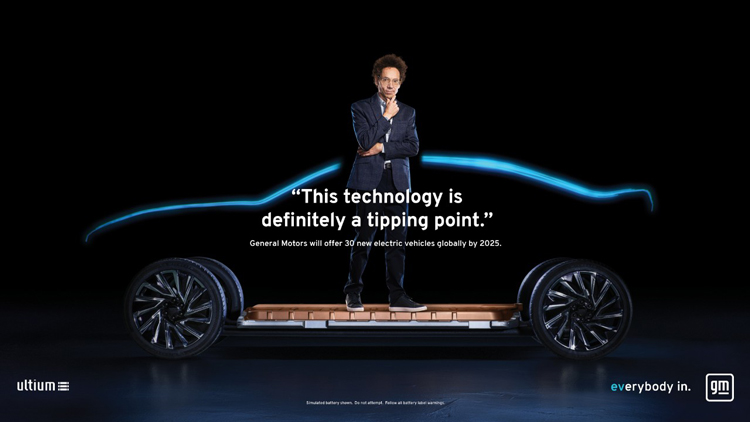 The new branding rolls out across GM’s redesigned website, which will publish stories about innovation and technology that is helping to make the mass-adoption of EVs a reality.

What do you think of GM’s new logo? Let us know in the comments below.