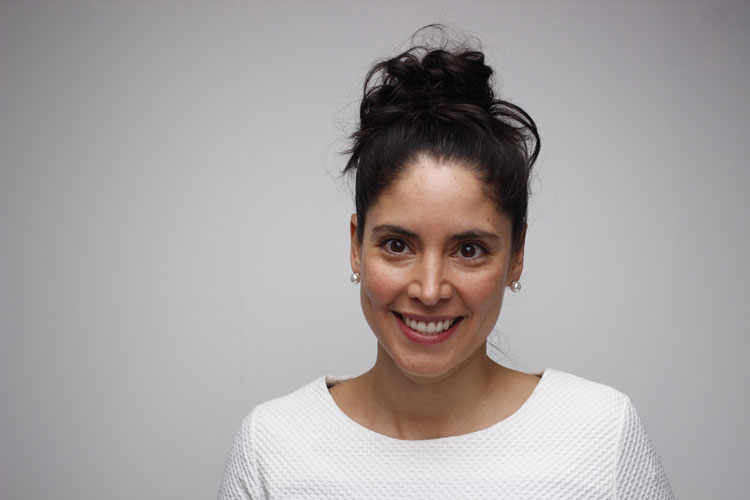 Co-founder of three-dimensional (3D) design tool Gravity Sketch, Daniela Paredes was a student at the Royal College of Art (RCA) when she co-created an app that allows people to draw in mid-air, within a virtual environment.

The software is now being used by a growing number of automotive companies to help them design cars, as well as product designers and film-makers.

Allowing people to see their sketches though augmented and virtual reality (AR and VR) headsets, Gravity Sketch’s aim is to speed up 3D design processes and make them simpler, according to its founders.

Paredes was recently named as a winner of the Women in Innovation Awards 2019 run by Innovate UK for Gravity Sketch, a government initiative which champions and supports female entrepreneurs who are developing concepts to solve challenges in society, and was awarded £50,000 funding.

But while the designer may seem to be going from strength-to-strength now, the 33-year-old describes her journey as a “rollercoaster”, admitting it has not always been easy to know if she has been heading in the right direction.

Paredes’ journey started in Mexico, where she is originally from. She knew she was “creative” from a young age as she always enjoyed making things with her hands, and was “often collecting rubbish, putting things together and taking them apart,” she says.

At the age of 10, she saw a friend’s sister making a chair. “I asked her what she was doing and she told me it was her homework as she was studying industrial design,” she says. “That’s when I thought ‘this is what I want to do when I grow up’.”

She studied an undergraduate degree in industrial design at Technologico de Monterrey in Mexico, during which time she spent a year studying at the Ingvar Kamprad Designcentrum, part of Lund University, in Sweden.

“Having had international experiences makes me who I am,” says Paredes, who would go on to spend time living, working and studying in a range of different countries and absorbing how design and design education varies across the world.

Studying in Sweden, she found there was a stronger focus on “sustainability” that was “really embedded in the design process there”, much more so than in Mexico at the time, she says.

Teachers there were also more “straight-to-the-point” with their critique in Sweden, rather than “hiding it behind nice comments”, as she says was the case in Mexico.

“I wasn’t used to it,” she adds. “It was hard at first, but it was useful. It was about learning how to take that feedback and knowing it wasn’t personal. I got tougher by the end.”

She landed her first graduate job as a merchandising junior designer, for L’Oréal in Mexico, after recruiters from the company visited her university while she was in her final year. The role, which she did for about eight months, involved working on the layout of stores and designing furniture.

She then worked with an architecture firm in Madrid for about a year, helping to design a golf course and club house, before returning to Mexico.

Paredes was keen to do a master’s degree at the “best university for design”, so she then applied to the RCA in London and two US universities, ArtCenter College of Design in Pasadena, California and the Pratt Institute in New York.

“I thought I wasn’t going to get into any of those as everyone applies to them,” she says. “But I got acceptance letters for all three.”

She initially accepted an offer to ArtCenter, but decided the course was too similar to her undergraduate and left after a month, instead spending the year freelancing in Mexico, which she says was a challenging time.

“My journey has been really on-and-off because I was gathering experiences and knowledge and trying to figure out what I wanted to do,” she says.

“There were times when I looked at my friends who were [progressing] their careers step-by-step, sometimes in the same company. I would see them growing and I would feel lonely as I was starting and finishing jobs and freelance projects,” she adds.

During the year when she was freelancing, she co-founded a company with friends, based on the idea of harnessing energy generated by people in spin exercise classes, which involve pedalling on stationary bicycles.

They were keen to “gamify” the experience of spinning, by translating the energy that cyclists generated into points, letting people compete for the highest score. They launched a pop-up event around the idea, but “a lot of investment” was needed to take it further and eventually it came to an end.

She went on to start a two-year master’s course in Innovation Design Engineering at RCA, run jointly with Imperial College London’s Dyson School of Design Engineering, which she describes as “one of the best moves” in her career as it “completely changed” the way she thought about design and gave her a lot of new skills.

“Before I had wood, plastic and metal as my materials to design with. Afterwards, I had technology, science and engineering to design with as well,” she adds. “I felt free to do the things I wanted.”

Her second-year group project at RCA was the first version of Gravity Sketch, which she devised with course mates Guillaume Couche, Pierre Paslier and Oluwaseyi Sosanya.

The current version, which has changed a lot since its inception as a project at RCA, works with handheld controllers or hand-tracking devices such as Leap Motion, which people use to draw, design or colour-in with in a virtual environment through gesture. The designs are seen through VR and AR headsets such as Oculus Rift or HoloLens.

A 3D printing exhibition at the Science Museum in London originally sparked the idea for Paredes and her group. They felt there was a shortage of mediums for communicating 3D ideas and existing ones often involved computer-aided design (CAD) software that was “complex” to use.

They decided to focus their project on the idea of “spatial intelligence”, inspired by a theory by psychologist Howard Gardner, which suggests that humans have a range of cognitive abilities and ways of learning, rather than one general form of intelligence.

The group initially created a software and hardware combination, which lets users sketch a design on a digital sketchpad and see it appear in 3D through an AR headset. This first version of Gravity Sketch consisted of a clear acrylic sketchpad and a stylus to draw with.

When they exhibited it at the RCA final project show, they had a “30-minute queue the whole time of people wanting to try it,” Paredes says.

After graduation, Paredes and her former RCA course mate Sosanya continued to take Gravity Sketch forward, dropping the hardware element and focusing purely on software. They later brought in Daniel Thomas as their chief technological officer.

In 2014, Gravity Sketch was awarded the James Dyson Fellowship run by the James Dyson Foundation charity, which provides patent funding and mentoring to promising RCA graduates who have invented something with commercial potential.

During this time, Paredes also got a job with Jaguar Land Rover as an experience innovation designer for autonomous vehicles, which involved working on projects using artificial intelligence (AI) technology. She did this for about two years while working on Gravity Sketch at the same time.

Paredes admits the first few years of taking Gravity Sketch to market were difficult for the team, as continuing to get enough funding proved challenging.

“We have had ups and downs and the downs have been very low,” she says. “There were times we did not know if we would be able to continue or even pay the rent,” she adds.

One of the most challenging things about her career has been “not having stability”, while seeing others around her progress, she says, but she has now “learned to live with it”.

From her experiences, she says she learned a key lesson — not to compare herself and her path to others.

She now feels her efforts were “all worth it”; today, around 15 car companies use Gravity Sketch to help them design projects according to Paredes, as well as companies in other design fields such as industrial and product design, and film-making.

The designer, who lives in London but often travels to Mexico and the US where Gravity Sketch also has customer bases, says her future will focus on developing the product and company further, adapting it for the various sectors that use it.

“People in different fields such as concept art and architecture would like to do different things with Gravity Sketch, so we are growing the platform and also developing a cloud system to allow people to co-create with others around the world,” she says.

Advice she would give to budding designers is to “harness as many skills as possible” and be multidisciplinary in their approach.

“The design world has changed quite a bit from when I started,” she says. “It has become way more connected to tech and science.”

“We are in a different era now, where you make your own tool set and the more interesting that it is, the better a designer you will be.”