“Objections to coronavirus tracing apps seem to be more expected in countries such as the UK and the USA, where fears around data misuse are more prevalent and political divisions have heightened mistrust in governments,” Fura Johannesdottir tells Design Week.

Johannesdottir is Huge Inc’s chief design officer and is based in Iceland, where she says that the “small population has so far had faith in this use of technology”. She believes that the apps’ popularity might depend on the “cultural context” and designers’ role in clarifying their purpose. “There is a cultural consensus to view these apps as servicing the community at large and instrumental in helping us fight the view”.

The UK’s road to releasing a nationwide contract tracing app has not always been smooth. Inspired by Singapore’s TraceTogether, a contact tracing app works by Bluetooth. When two people who have the app downloaded come into contact with each other (usually within 6ft and for at least 15 minutes), their phones store details about each other on their phones, creating a contact list. If you are a user of the app who is then diagnosed with coronavirus, you alert the app, which in turn alerts the people on your contact list. If you have come across someone who has been diagnosed, it is advised that you isolate.

The UK government announced in mid-April it was working on app, and began a trial phase at the start of May on the Isle of Wight. So far, there have been around 73,000 downloads. It is estimated that around 60% of the nation would have to download the app for it be successful; the island’s population is around 140,000. There have been some technical issues with the roll out. For example, it won’t run on phone systems with software older than Apple iOS 11 or Android 8. And unlike most countries’ contact tracing apps, information is being stored centrally on a database held by the NHS, which has attracted widespread criticism.

“These apps need to warrant trust is transparency,” Johannesdottir says, though this does not necessarily mean displaying to users the precise information that is being stored about them. “That kind of transparency runs the risk of the data itself not being encrypted and therefore vulnerable to misuse,” she says.

Johannesdottir, who is a jury member on D&AD Awards’ digital design category 2020, says: “The apps need to be open, honest and clear about precisely what they are trying to achieve and how they work. This requires a perfect balancing act from user experience (UX) and user interface (UI) designers, as an overload of inaccessible technological language will encourage as much mistrust as vague, ambiguous information.”

She believes that content design is crucial to this, citing graphics, illustration and writing as a way to communicate with users. “It is our role as designers to ensure that this message is communicated clearly,” she says. “When the world is on the brink of panic, simplicity is key.”

“Lockdown is a huge behaviour change” 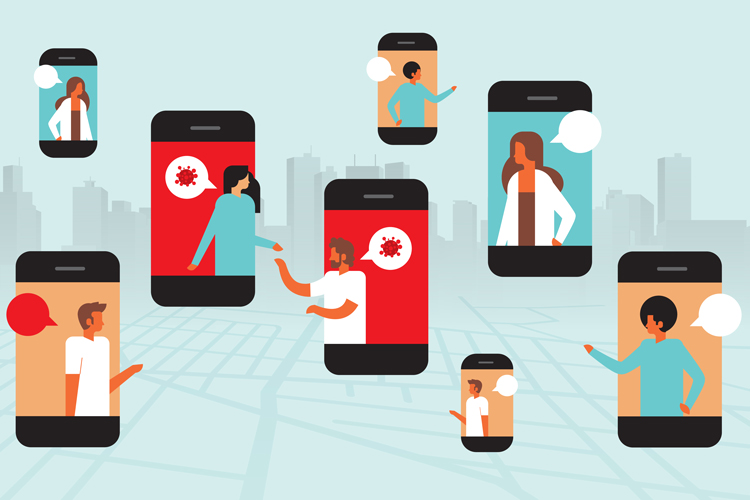 What sort of app design could communicate this “simplicity”? Dave Dunlop, chief design officer at Else, says “transparency” is key. Having worked on health-based apps before, Dunlop says that it’s important to let people know exactly what’s happening with their data. He mentions adding a sign-up form where people had to check a box so that their data was anonymised. “Being upfront about that helps to build trust,” Dunlop adds.

Dunlop believes the design could be pared back. “At its simplest it could be thought of as a background app,” he says. “It only needs to come to the foreground when it’s bringing you a problem.”

But that doesn’t mean the user interface couldn’t be more helpful for people during the lockdown period. Dunlop likens it to a “companion setting”: “Can’t it be the thing that helps you through this?” He suggests that it could provide tips and advice, like the “nudges that the government is talking about now”. An app could make those more “real”, for example, by giving advice like suggesting people walk to work rather than taking public transport.

Dunlop stresses that it’s not just “functional” but also the “emotional” design that is important. Crucially, the app requires people to “understand why they’re downloading it”. In this respect, the messaging around the app has been unclear, he believes. Dunlop contrasts it to the COVID-19 symptom tracker app released by King’s College London, which has so far been downloaded by over 3.5m people voluntarily in the UK. The purpose of this app – to provide the scientists with information – is clear.

Dunlop calls it a “higher calling”. “It’s the wrapper you put around the app, to encourage the right behaviour,” that is important, he adds.

Being clear about “motivation”

At the same time that the UK announced it was working on an app, Apple and Google announced a rare collaboration – the tech giants were creating a software that would allow such apps to work on a decentralised system. They said that the system would not track users’ locations or collect data that is stored on a server. This software was also important because it would allow the apps to be run in the background, in an attempt to preserve power and privacy.

It was a surprise then when the NHS announced the centralised data storage, and it has since been reported that a second app is in development, which would use Apple and Google’s software.

Aside from the technical aspects, Dunlop suggests that using Apple and Google’s software would help build trust as people are already familiar with those brands. And by using its own software, he says that the government has made people suspicious of its “motivations”. He asks: “Why wouldn’t you build on services that are already there?”

How do you design an “immersive” virtual product launch?