Warner Bros. has unveiled a new brand identity, which gives a new look to the famed “WB” shield, last updated in 1993. The design was led by Pentagram partner Emily Oberman and looks to position the entertainment company for the future.

Over its near-century in operation, the WB shield has largely remained the exclusive symbol of the company, only occasionally being replaced and then reinstated. Research showed the incumbent version was not working digitally at different scales.

“The previous iteration [of the shield] was highly detailed and hard to use at a small scale and in digital contexts, which are increasingly important” says Pentagram.

The updated logo sees the removal of the banner introduced in 1993 and has been redrawn in an attempt bring the shield and monogram back to prominence. “[The new shield is] based on the classical proportions of the golden ratio,” says Pentagram, adding that the letterforms have been rethought to “preserve their quirkiness but make them more modern”.

From the distinctive monogram, the team has also created a custom typeface for the company: Warner Bros. Condensed Bold. This was designed inhouse at Pentagram and then expanded into a full family of fonts by Jeremy Mickel, who has previously worked on custom typefaces for various Warner Bros. projects, including the Justice League films and the Fantastic Beasts and Where to Find Them franchise.

Warner Bros. Condensed Bold will be used across company assets and is designed to give “a sense of the company’s history” while being “clean, modern and timeless”. The new “WB” monograph has directly inspired the new bespoke typeface according to the team – such as the curvature of the “B” being used to inform the new “R”. 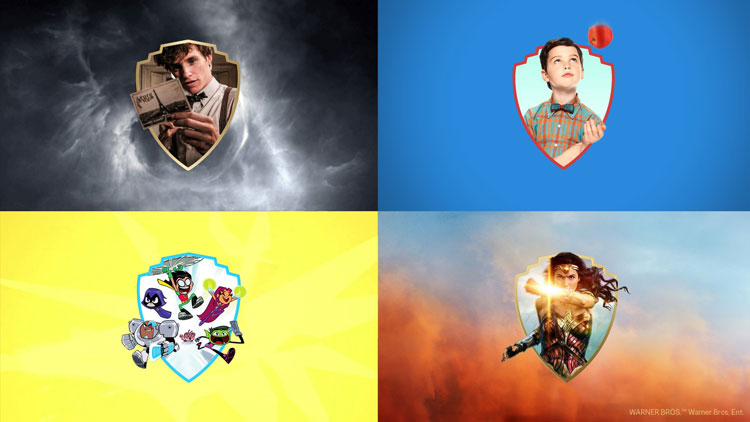 With the team identifying the necessity for the new branding to be competent digitally, the logo has been optimised for use across platforms and scales. Additionally, a “dimensional” version of the logo has been created, earmarked for use onscreen where it can be customised for opening and closing credits, or as promotional content using the shield as a frame.

The project was undertaken in advance of the entertainment company’s centennial celebration in 2023, when it will reflect on milestones such as creating the first synchronised dialogue in films in 1927.

The identity was officially unveiled to staff in a ceremony on Wednesday, where a tuxedo-clad Bugs Bunny revealed the new logo, which had been printed on the recognisable Warner Bros. studio lot water tower.