Medicine: The Wellcome Galleries — an object-rich exhibition with over 3,000 items tracking the history of medicine — is opening at the Science Museum.

They are the largest galleries exploring the history of medicine in the world, with items ranging from an iron lung to the world’s first MRI scanner and a scale model of a 1930s hospital. 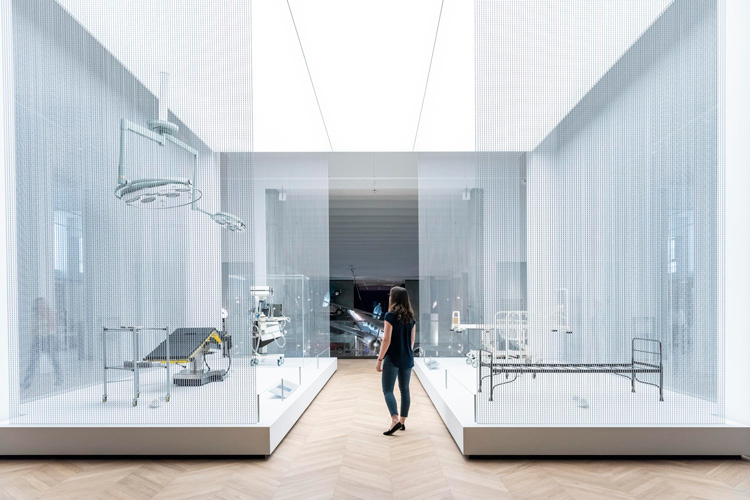 The exhibition has been designed by Wilkinson Eyre architects, who headed up two other galleries at the Science Museum; Challenge of Materials and Making of the Modern World.

The London-based architectural studio also worked on the 2015 refurbishment of the Wellcome Collection, the museum and library which displays artwork and medical objects. The Wellcome Collection is run by the foundation of the same name, which was started by medical practitioner Henry Wellcome. Many of the objects on display at Medicine come from Henry Wellcome’s collection, as well as the Science Museum’s own stores.

Medicine is a permanent exhibition – meaning it will last 25 years – and has cost £24 million. It is vast: situated on the museum’s first floor, the galleries are spread out over 3000m2, split into three main galleries and two smaller ‘threshold’ galleries.

Given this scale, the design team had to find a central thread. Julia Glynn-Smith, associate director at Wilkinson Eyre says that “people were put at the centre of the narrative”.

“Visitors’ own relationship with medicine is what you’re meant to reflect on,” she adds. “Everyone has some relation to medicine — whether it’s seeing a doctor or visiting a relative in hospital.”

The first gallery, Medicine and Bodies, tells the origins of medicine through early study of anatomy. The second, Medicine and Treatments, looks at medical developments like surgery and electrotherapy and the third, Medicine and Communities, explores state infrastructures which address health issues, such as the NHS and the sewage system.

Medicine and Bodies features a series of 18th century waxes and other light-sensitive objects. This meant it needed “full environmental control”, resulting in darkened exhibition spaces. “There’s a sense of mood and drama as you walk through,” Glynn-Smith says.

The room is divided into quarters — interspersed with a photographic portrait series from Sian Davey — with most objects displayed in freestanding “island” cases. These were designed with museum display makers Click Netherfield and allow for 360-degree viewing.

In contrast to Medicine and Bodies, the other two galleries — situated around the museum’s cavernous atrium — are daylit. The difference is emphasised by a brightly-lit area, resembling an operating theatre, at the start of Medicine and Treatments.

These two galleries’ sense of light informed the design of the displays; Wilkinson Eyre created 7m-long frameless ‘balustrade cases’ which line the balcony. This means visitors can see the objects on all sides, from the level below and above as well as the galleries across the way.

Two threshold galleries break up the pace of the exhibition.

The first is a ‘Wunderkammer’ — a cabinet of curiosities — which houses 1,000 objects. This 4.5m high display wraps around the museum’s central 1970s lifts. It mostly displays objects from Henry Wellcome’s acquisitions and aims to “show the breadth of the collection”, according to Glynn-Smith.

The second threshold gallery is entitled Fear, Hope, Faith. Located at the end of the exhibition, this quieter area is bathed in what Glynn-Smith calls an “ecclesiastical purple light” and has a collection of saints and deities from all faiths, as well as a collection of amulets.

There are separate zones along the room’s edge, which feature audio testimonies from people around the world who have sought faith during medical treatment.

There are more AV elements throughout the exhibition; in a walk-in replica of a 1930s padded cell, playing real-life accounts from patients who have been kept in confinement. In Medicine and Treatments, a shopfront and interior of an early 19th century pharmacy has been installed, with accompanying audio of the kinds of exchanges that might have occurred there.

There are also three interactive displays in this installation; visitors touch leather surfaces — laid out on the chemist’s counter — which uses projection technology to guide users through processes like creating medicine or identifying poisonous substances.

Other interactive displays are dotted throughout the exhibition, with a focus on decision-making and education. One screen takes users through the process of getting a potential drug through medical trials.

How graphics can “distil a complex narrative”

The exhibition’s graphics have been designed by London-based design studio Holmes Wood. Annabel Judd, the studio’s director, says that the interpretive and environmental graphics “distil” the galleries’ “complex narrative” by using a hierarchy of visual information.

The main guides — “beacons” — have their headline text on reflective surfaces, so that visitors can see their reflections. Again, this was about putting people into the narrative. “The idea is that people can see themselves in that story,” Judd says.

Further down the hierarchy are “section totems” in a “venous” red colour and key section panels which are a “bone” shade. The system “allows all people — of different age groups and different interests — to engage with the exhibition”, Judd adds.

The galleries are the biggest and final stage of the first part of the museum’s masterplan, which has taken ten years to complete. Included in the project are Mathematics: The Winton Gallery, designed by Zaha Hadid architects as well as Wonderlab, an interactive space for children designed by Muf Architecture/Art.

Karen Livingstone, the director of the museum’s masterplan, says that the galleries mark a shift for the museum’s approach to displaying its collection. “We have brought together the scope of a national science museum with the best in architecture and design in a way that’s more associated with an art gallery,” says Livingstone, who was previously head of projects at the V&A.

Medicine has four specially-commissioned art pieces, including a 3.5 metre bronze statue from Marc Quinn called The Self-Conscious Gene. The towering statue is based on a teenager who tattooed his whole body with anatomical diagrams after discovering he had a brain tumour. There is also Bloom, an illuminated installation from Studio Roso about airborne diseases, which is suspended from the museum’s ceiling.

This approach “can help introduce people to a subject they might not otherwise engage with”, according to Livingstone, though it has taken some convincing from those with more traditional ideas about how a science museum should display its collection.

She says: “I’ve had to work carefully with scientists why the architecture and design-led approach enhance the stories we want to tell, rather than undermine them.

“Our collections are very beautiful even if they’re not made to be displayed — they’re made for scientific and practical application. But they’re also the gateway for the types of story we want to tell.”