According to Wholly Veggie, its mission is to help create a more sustainable food system by “democratising access to healthy foods made from plants”. The company does not offer meat-alternatives, but rather “quality vegetables and simple seasonings”. 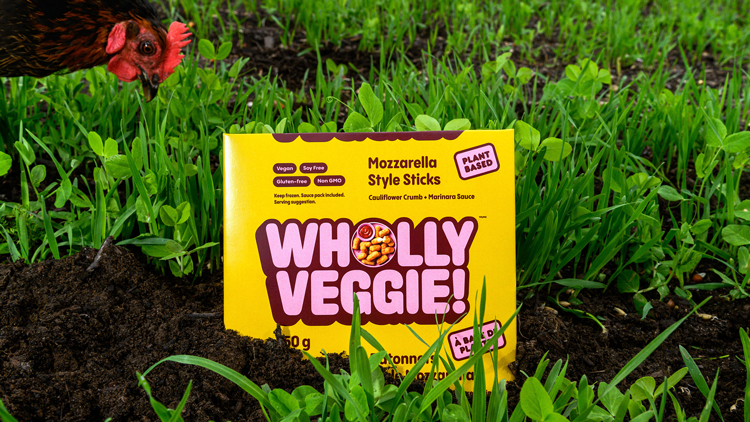 “An opportunity to take an entirely different route”

Public Address was introduced to the project initially through another client, according to co-founder Chris Braden. He says from the outset, the team wanted to create a brand that boasted the “benefits of an unconventional approach to design”.

In researching the market Wholly Veggie exists in, Braden and team found plant-based brands typically go down one of three paths aesthetically. “[It is either] rustic or faux-farmers’ market; modern, from the lab to your plate; or artisanal fancy freezer food,” he says.

“Our positioning of ‘vegetables, but fun’ gave us an opportunity to take an entirely different route,” Braden adds. Inspiration for the branding was taken “from all over”. “The diverse range of colours of veggies themselves, concert posters, back-to-the-land pamphlets, cartoons, and agricultural fairs – essentially, anywhere we could find ‘fun,’ ‘veggies,’ or both,” he explains.

“Vegetables are way more colourful than they get credit for”

More research revealed “pretty much every food brand” dedicated 80% of its packaging to depicting the food inside. “If we were going to follow the same formula, it would mean our main job was figuring out how to take a slightly better picture of a pizza, for example,” Braden says.

Instead, the team did the opposite – making the branding itself the focal point. Braden says that as well as helping the packaging to stand out on-shelf, this will also be of use as Wholly Veggie looks to expand into other aisles of the supermarket.

A main feature of the branding is the colour palette. While green is the go-to colour for many plant-based brands, Braden says the team “wanted to make sure it wasn’t the only one”. “From the deep red of beets, to the warm white of cauliflower, to the bright purple of cabbage, vegetables are way more colourful than they get credit for,” he says.

Colour combinations have been sourced directly from the product ingredients themselves. 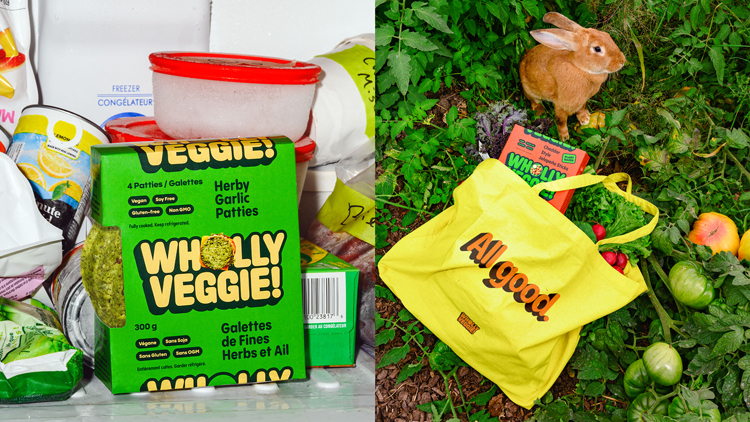 “We had some cooperative and photogenic farm animals”

Accompanying the colour palette is a typeface which aims to put distance between Wholly Veggie and its competitors. Braden says the typefaces found in the plant-based section of the supermarket are “all pretty similar”.

“There are clean sans serifs for the lab-to-table brands, some scripts and serifs for the fancy freezer food, and some big woodblock-inspired type for the faux-farmers market products,” he says. To avoid this, the team has used Pangram Sans. Braden says the typeface “breaks category conventions”, while still being fun, clear and easy to read.

Photography has also been used to add an element of fun to the brand. Imagery of the food itself takes a backseat, though is still present on the packaging. On-pack food photography is seen via a window device created from the “O” in Wholly Veggie.

In communications, characterful images of farm animals are used to get across the idea the food is “fun, easy and informal”, Braden says. “Whether in the grocery store, at the farm, or in the studio, we looked to create unexpected, fun moments,” he says. “Thankfully we had some cooperative and photogenic farm animals, who are also big fans of people having wholly veggie diets.” 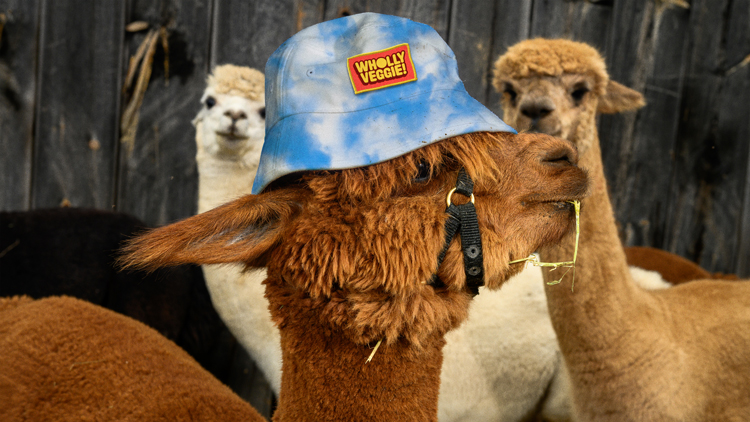 What do you think of Wholly Veggie’s branding? Let us know in the comments below…