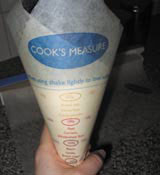 Students are generally notorious for their lack of culinary skills – a reliance on baked beans and Mum’s Sunday roast dinners sees most through their formative university years.

So it should come as no surprise that, despite her name, Mary Rose Cook, the winner of this year’s BDC New Designer of the Year Award, doesn’t like to cook. Until you take a closer look at her award-winning piece – an intriguingly straightforward product designed to help us experiment with the pleasures of baking a cake (DW 14 July).

Called Cook’s Measure, the winning product is simply five cake recipes printed on sheets of greaseproof paper. Ingeniously, the paper is also the measuring device for each ingredient and the baking paper for the cake.

Her project also features three more products, including a roll of greaseproof paper that you rip, like cling film, to use as a measuring device for more than 20 items, and two other ideas for measuring liquids and solids, which are still in development.

Design writer and curator Max Fraser was one of the award judges. He says the complex thinking behind what is outwardly a very simple idea, its commercial potential and its simple production methods, all impressed the judges. ‘It’s about making cooking more enjoyable, and it is much more organic than Delia Smith and all her measuring cups,’ he says.

But 22-year-old Cook, who graduated from Goldsmiths with a BA in Design this year, is firm on the subject of her cooking prowess (or lack of it) and reiterates it several times. ‘I don’t cook. I hate cooking. My signature dish is a salad,’ she insists.

The idea for the products came from what Cook credits as ‘conceptual Goldsmiths way of thinking’. ‘We were encouraged to come up with one area [of thinking], explore it in detail and believe that a product would emerge from the process,’ she says.

Cook’s Measure derived from her investigations around the space between people and objects. ‘My experiments centred around cups and containers, and how they are used,’ she explains. ‘Then I thought that we can change the volume of objects by the way we hold them, by squeezing for example, and that we also use our bodies to measure objects – like a foot or a handful. That led to cooking. The end piece is a quick and easy way of measuring, without scales.’

The diversity of the course is highlighted in two of her university projects. In one she worked as part of a team that updated an informal meeting area at Bloomberg’s plush City offices. The space was converted into a pub garden, complete with benches with whiteboard tops and beer mat note pads.

In another, a seating project for the London Architecture Biennale, students created three benches for parks in Clerkenwell, including a ‘bench of nails’ made from tightly packed fence finials and a wry take on an in memoriam bench – vacuum-formed, it encompassed a piece of carrot, two pieces of coal, a scarf and a plaque with the words ‘in memory of winter’.

Cook is now completing her first paid project: a two-month commission to create a meeting room for BT. She prefers to call it a spatial project rather than interior design. ‘It’s a mix between furniture, product and interior design,’ she says.

She resists typecasting herself. ‘I don’t want to put a label on it, I can do lots of things, but I don’t just want to design things just for the sake of it. So many chairs and lights have been created,’ she says, ‘and doing that can be fun, but I prefer to design for an actual space, when there’s a reason for it.’

She admits to feeling a slight sense of unease, that moment of hesitation that all graduates face stumbling into the fray of the real world after four sheltered years with a purpose and a focus. ‘It’s a bit unnerving, but I’m calmer than I thought I’d be. I do tend to prefer things to be in place and in control,’ she says.

And there is every sign that things are in hand. Cook is applying for funding to start up the business, either on her own or with a friend who is also a product designer. ‘I want to get Cook’s Measure into production and find someone to sell it. And I’d like to carry on designing experiences and working on the product side too,’ she says.