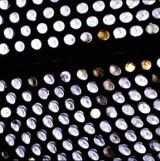 A mosaic of light created from cardboard tubes and multi-coloured light bulbs by artist Jason Minsky will illuminate the Christmas Lantern procession in the Lancashire town of Radcliffe on Saturday. Minsky says viewers should be able to trace ‘red cliff’, the old name for Radcliffe, among the colours and shapes, plus a river in blue and Roman coins depicted in yellow. The installation, called Late (Light At The End) is housed in a 2.4m2 space in the disused Radcliffe Times building and will be visible until 12 January 2004. Minsky, whose previous work – for instance, a Nike logo in a forest – has explored the iconography of advertising in unusual contexts, was commissioned by Bury Council and art sponsor Commissions In The Environment.