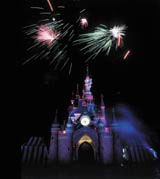 All is not well in the Magic Kingdom. When Roy Disney, nephew of the corporate paterfamilias Walt, resigned from the board last week, he accused the Walt Disney Company – an entertainment behemoth now spanning media networks, retail and merchandising, as well as theme parks and movie-making – of having ‘lost its focus, its creative energy and its heritage’.

The target of his ire was Michael Eisner, the chairman and chief executive Mr Disney helped to appoint in 1984, who has presided over a huge expansion in the company’s activities and fortunes since taking the helm.

Recent years, however, have not been so favourable. According to the company’s latest annual accounts, fewer people are coming to Disney’s resorts and visitor attractions; plus, its own animated output is failing to wow cinema critics. While the link-up with computer animation hotshot Pixar has led to a string of hits – from Toy Story to Finding Nemo – most observers regard the smaller firm as the creative partner, with Disney supplying the marketing clout.

Hard-hearted analysts reckon Roy Disney has simply been out-manoeuvred in the boardroom and is now sounding off. All the same, despite Disney’s rebounding share price, surely alarm bells start ringing when someone bearing the family name says the brand is ‘rapacious, soulless and always looking for a quick buck’.

Ralph Ardill, Imagination marketing and strategic planning director, thinks so. For him, Disney’s comments are ‘right on the money’.

As the company has become more successful, its entertainment has become ‘more formulaic’ and ‘the spark of its inception has been lost along the way’, he suggests.

Ardill finds it ‘ironic’ that an empire built on ‘the power of storytelling’ has lost the ability to spin a great yarn. And this ‘loss of excellence’ is not only a problem at the box office, it also means the company is unable to ‘communicate with itself’.

Ardill adds, ‘There’s been an over-reliance on characters at the expense of storytelling. Characters carry you through a story, but they aren’t the story in themselves. Look at the success of The Lord of the Rings and Harry Potter. First and foremost, they are great stories with an [archetypal] hero’s journey.

‘Pixar is more in touch with the zeitgeist. Films like Toy Story and [Dreamworks’] Shrek are a total swipe at the formulaic, out-of-touch model of storytelling. It’s not just their technical capability, they are closer to contemporary mindsets.’

Looking at the business issues, Enterprise IG group marketing director Robin Kadrnka thinks Disney is ‘on the right track’ with its diversification strategy. But she wonders whether ‘magic’ is still Disney’s central brand theme. ‘[Is] the modern interpretation of “magic” different from where “magic” in the Disney context started out?’ Kadrnka asks.

‘As kids get older younger, their expectations and demands also change and have become more sophisticated. It may be that Disney now appeals to a narrower, younger family market than it did a few years ago. [So], it is possible a much larger portion of the population is actually alienated by the Disney brand rather than engaged with it.’

According to Ardill, what originally distinguished Walt Disney was the ‘audacity of his ambition’ [see quotations, left]. ‘If you asked who is the world’s greatest storyteller these days, it wouldn’t be Disney,’ he says. ‘And Walt would be appalled by that.’

The narrative element is important too in experience design, suggests Event Communications creative director Steve Simons. While Disney ‘is still the premier attraction in the world’, it has become a ‘descriptive noun’ for any kind of theme park, resulting in a ‘dilution of the brand’, he says.

Such confusion may be the price of ubiquity and success, but Simons believes ‘work done by immediate competitors is better and more creative’.

Universal Studios’ Island of Adventure in Orlando is setting the pace, he says, particularly among the vital 16-23 age group. Its Spiderman ride is the ‘best in the world’, because ‘there’s a narrative that’s followed through’. By contrast, he observes a ‘level of mediocrity’ in Disney’s recent efforts like the film park in Paris.

Ardill says: ‘There needs to be a cultural and commercial revolution within Disney that engages with what the purpose of Disney is and what it wants to contribute above and beyond making money.

‘These businesses that are great in the scale sense and great in legacy terms need to believe in something. It’s the founding belief that will differentiate them if they are to keep going,’ he adds.

Finding another JK Rowling would be Disney’s elixir, Ardill suggests, but that quest might not have a fairytale ending. Instead, he thinks Disney should follow the example of a rejuvenated Lego, which has ‘held up a mirror to children’s imaginations’.

The Wisdom of Walt Disney

‘It’s kind of fun to do the impossible’

‘Our greatest natural resource is the minds of our children’