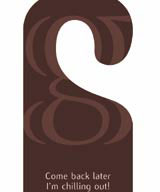 Spirit Group-owned The Greswolde Hotel and Brasserie next week relaunches with an identity by OneVoice Design, in a bid to differentiate itself from ‘corporate hotel chains’ surrounding nearby Birmingham International Airport.

Operations director of Spirit Group’s research and development arm Peter Myers, says the consultancy was briefed to create an ‘informal and elegant’ identity that would give The Greswolde ‘the appearance of an independently run hotel’ without ‘being too gimmicky’.

The work encompassed development of a marque and ‘new language’ to be applied to signage, stationery, promotional and point-of-sale materials, says OneVoice Design creative director Andy Stoddart. This could be extended to a website, www.thegreswolde. co.uk, and advertising next year, he adds.

The marque, a ‘leathery brown’ for brasserie and ‘back-of-house’ materials and a ‘subdued, olive green’ for use elsewhere in the hotel, is ‘understated, classic and long-lasting’, says Stoddart.

‘Friendly’ language, including a twist on traditional Do Not Disturb signs – ‘Come back later, I’m chilling out’ – will appeal to business travellers who are ‘sick and tired of being corporate cattle’, he says.

Spirit Group moved to revamp The Greswolde after identifying that a ‘one-off boutique hotel was the most suitable offer’ for an ‘affluent’ area servicing both an international airport and the National Exhibition Centre, says Myers.