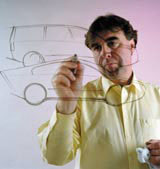 Horbury will oversee design strategy and execution for Ford, Lincoln and Mercury in the US from the start of next year. The news follows Ford’s decision to wind down its Ingeni design studio in London’s Soho by the end of the year (DW 4 December).

Horbury will report to Ford group vice-president of design J Mays ‘to work his magic on this side of the pond’, says a spokeswoman for Ford in the US.

‘It’s a new role and it’s a gigantic remit,’ she continues. ‘Both he and J are working right now on what his immediate focus will be.’

Horbury, who is tipped as a potential successor to Mays, is likely to be asked to look at the Lincoln brand first, before reviewing future product design strategy and design processes for other Ford brands in the US.

His departure from PAG will leave Jaguar design director Ian Callum, Land Rover design director Geoff Upex and Volvo design director Henrik Otto reporting to Mays, who says, ‘The PAG’s designs and strategies are in fine shape, thanks to Peter, and I’ll make sure that remains the case.’