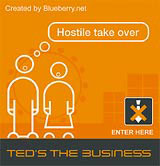 Entitled Ted’s The Business, the site supports Ted Baker’s new store in London’s Canary Wharf, which is dedicated to work clothes. The market is vibrant thanks to the growing trend towards dressing down in office environments.

A Blueberry spokeswoman says, “We recommended adopting an alternative sales channel in addition to a website, and chose Pocket PC.

“We had to produce a navigation that made the buying process as rapid as possible and complemented the working system of the Pocket PC. Image thumbnails and screen scrolling made the process quite slick,” she adds.

Blueberry.Net entered a non-competitive pitch for the work, having designed the Ted Baker website in 1999.