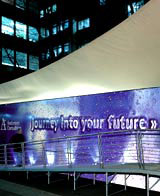 While the design world appears to have gone completely merger mad over the past year or so, a handful of creatively led consultancies have been quietly effecting changes that have transformed their businesses in terms of their size and scope.

Pentagram Design is a classic example of an independent group that is constantly refreshing its portfolio, adding talented new partners on both sides of the Atlantic to extend the disciplines it covers. It hasn’t really changed its culture in almost 30 years, but it has shifted its emphasis, particularly regarding the size of clients and its approach towards digital media.

However, there are others with equally good creative credentials. Among them is interiors and architecture group Virgile and Stone, featured on the following pages, which set up ten years ago as a Fitch breakaway within Imagination. Founders Carlos Virgile and Nigel Stone have extended its repertoire from a retail and leisure base to take on office design, airport work and even standalone graphics. So how have they done it? Largely by happy accident, and by insisting on keeping creative quality at the top of the agenda.

There has been a bit more of a plan behind the way Deepend, also featured here, has developed. In its six-year life, the consultancy has stunned the design community with its fantastic growth to 100-plus staff, offices around the world, and fee-income of £4.4m for digital design alone. Its success prompted its founders to set up digital media-to-public relations conglomerate Deepgroup in 1999. Particularly interesting is the fact that the group’s three principals, Gary Lockton, Simon Waterfall and David Streek, are all still aged around 30 and started out as product designers.

They have managed this rapid expansion by letting things evolve naturally, back at base in London and with merger partners across the world. The culture at Deepgroup is control by no control – and so far it seems to work.